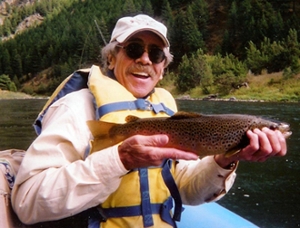 I was privileged to know Bill Wilson as a friend and colleague for over three decades. I’m honored and humbled to share some reflections with you on his academic and professional life at the University of Utah.

Our PA Program will be celebrating its 40th anniversary this September, at which time we will honor Bill’s legacy. Over the years he was involved in the education of hundreds of PAs (many of us here today - included). These PA graduates, in turn, have positively affected the lives of tens of thousands of patients - truly a remarkable legacy.

By all measures - PAs have been a resounding success, thanks to Bill and individuals like him, who were not afraid to take the risks necessary to create this new profession. A profession dedicated to helping the medically underserved of our country by providing critically needed primary health care services.

Utilizing returning medics and corpsman from the Vietnam war, providing them an intense educational experience at the medical school and imbuing them with the attitude of “service before self” in team practice with supervising physicians, was indeed a formula for success.

In the early years, PA class size at the university numbered in the teens and Bill and Lyle came to know these young, idealistic, student caregivers on an intimate level, nurturing both their medical education and their personal lives as these developing professionals entered a new arena.

Today our PA classes number in the 40s, out of applicant pools nearing a thousand qualified individuals - A true testament to the dedication and commitment of this amazing couple. Bill and Lyle fostered a family atmosphere at the PA Program that still exists - to this day.

In the early years there were a handful of programs, today there are 148 accredited Physician Assistant programs in Universities across the country. I’m happy to report that the Utah program has ranked in the top 5, ever since USN&WR began ranking PA programs a decade ago. We are ranked along side the likes of Duke, Emory, George Washington University, and the University of Iowa. Bill was never concerned with rankings only our mission, but his efforts early on put us in very good company.

Throughout his years with the PA Program, Bill was always true to the primary care mission of service to those less fortunate in our community. He was courageous in this pursuit and the program, the department, the university, and the profession benefited greatly from his wisdom, his passion, and his compassion for others.

Bill received his undergraduate and graduate degrees from the University of Utah culminating with his PhD in 1977.

In 1970 after a few years of working with Dr. Hilmon Castle at the Intermountain Regional Medical Program at the University - together they founded the PA Program in the Department of Family and Community Medicine – as it was then called. Over his 32-year academic career, Bill actively pursued the teaching, research, and service missions of the University.

He wrote prolifically and, I must say, beautifully. We all, at the Program benefited from his graduate work in English and creative writing. His many peer-reviewed journal articles, monographs, and book chapters helped define the PA profession in the early years and helped to celebrate its success as the decades passed.

Not only did Bill effectively run the PA Program, he took a lead role in helping to establish a funding stream from the federal government through the Bureau of Health Manpower in the Department of Health, Education, and Welfare to promote the fledgling profession.

Working closely with the Honorable Paul G. Rogers, United States Congressman from the state of Florida, with Dr. Castle, and with Drs. David Sundwall and Richard Smith, he left an indelible mark on the PA Profession.

Along with Dr. Smith (the medical director at our sister program at the University of Washington), Bill was active on a national level in helping coordinate the consortium of MEDEX PA programs. He also contributed substantially, in the formative years, to the development of the Association of Physician Assistant Programs and he fostered the growth of the National Commission on Certification of Physician Assistants along with its Executive Director – David Glazer.

So, not only was Bill instrumental in securing funding for all developing PA programs across the country, he had the foresight to tend to the professional and regulatory needs of this new profession.

Bill was as comfortable at a congressional hearing as he was fly fishing on the Madison – and – he often combined the two, bringing together his friends from Utah with his professional colleagues from around the country on western trout streams for some rest, relaxation, and some networking - while in the throes of creating a new profession. Bill was the consummate networker.

His expertise was sought after, not only by Congress, but also, by many other national organizations and with his giving nature, he provided consultation to groups such as: The Robert Wood Johnson Foundation, the Archstone (FHP) Foundation, and the American Academy of Ophthalmology (to name just a few).

He even explored the PA concept internationally through the governmental agency USAID as a consultant to: Pakistan, Thailand, and Guyana.

Closer to home he worked with the Utah State Medical Association, the State Legislature, and Governor Calvin Rampton - to write the original Utah PA Practice Act, to assure that our new PA graduates would be able to work in practices along side their supervising physicians to extend access to much needed medical care.

Bill was a prolific grant-writer; taking advantage of the very federal grant program he helped to create, bringing millions of grant dollars to the University. The Utah Program has benefited from a federal grant in almost every year of its 40-year existence thanks to Bill.

Throughout his career many local and national groups recognized Bill for his fine work. Some highlights include:

With the welfare of PA students always in mind, in 1988 he crafted a scholarship program to fund students who were training in underserved rural areas of the intermountain west. In 1994 he coalesced financial resources from a number of different entities to endow this scholarship program and upon his retirement we named it the Dr. William M. Wilson Underserved Areas Scholarship.

This endowment now provides 4 to 5 ($5,000) awards to PA students willing to work in underserved rural or inner city primary care practices. This is an activity that speaks to what Bill believed was the most important, fundamental tenet of the PA profession.

Retiring from the University in 2003, Bill was designated with Emeritus status as a tenured Associate Professor.

Personally, I benefited greatly from Bill’s mentorship. He hired me in 1979 after I completed the PA Program. He helped us all as young faculty with his impeccable style, sophistication, and insights. He could lighten the mood of even the most contentious of meetings with his quick wit and humor. He could also make the hard decisions – never losing sight of the mission he cared about so deeply.

He set the course of the PA Program on the path of success. He allowed us, as faculty, the flexibility to pursue our own direction, our own interests and our own individual successes - and I will be eternally grateful to him for that.

I’d like to close my remarks with a poem by Will Allen Droomgole that, I think, captures the role Bill played in the lives of so many of us.

An old man going a lone highway
Came in the evening cold and gray
To a chasm fast and deep and wide.
The old man crossed in the twilight dim,
The sullen stream had no fears for him,
But he stopped when safe on the other side,
To build a bridge to span the tide.
“Old man,” said a fellow pilgrim near,
“You are wasting your strength with building here;
Your journey will end with the ending day,
You never again will pass this way.
You’ve crossed the chasm deep and wide,
Why build you this bridge at eventide?”
The builder lifted his old gray head,
“Good friend, in the path I have come,” he said,
“There followeth after me today
A youth whose feet must pass this way.
This chasm which has been naught to me
To that fair haired youth might a pitfall be.
He, too, must cross in the twilight dim;
Good friend, I am building the bridge for him.”

Dr. Wilson was a builder of bridges for generations of PAs, ushering new students into a grand profession and he has our deepest gratitude. Our program and the profession will not forget Bill and his many contributions and his legacy will live on in the good and noble work of our graduates.