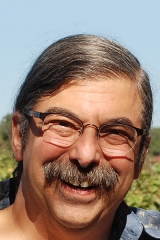 David Grunwald, PhD, is Helen Lowe Bamberger Colby Presidential Endowed Chair of Human Genetics at the University of Utah School of Medicine. He is Director of the NIH-sponsored Genetics Training Program, Executive Director of Zebrafish Core Facilities, and a member of the Nuclear Control of Cell Growth and Differentiation Program at Huntsman Cancer Institute.

Grunwald's research team studies cell-intrinsic and as well as intercellular signaling factors that regulate the maintenance or direct the differentiation of tissue precursor cells. Perturbation of these pathways during embryogenesis underlies birth defects, including a series of congenital myopathies that are modeled in the lab. Perturbation of tissue maintenance and turnover is a direct contributor to the origins of cancer. One project in the lab focuses on the role of a transcription factor complex required to maintain the undifferentiated condition of stem cells, which are reminiscent of cancer stem cells. A second project examines the role of calcium mobilization in signaling pathways that instruct tissue differentiation from precursor cells. In addition, the lab develops new tools to manipulate the genome to advance the study of gene function in zebrafish, which is a vertebrate model system for human disease, such as cancer.

Grunwald earned his BA in Biology from Williams College and his PhD in Genetics from the University of Wisconsin-Madison. He performed postdoctoral studies at the University of Oregon and Princeton University before joining the Department of Human Genetics in 1988. The lab has been supported by March of Dimes, Sloan Foundation, American Cancer Society, Muscular Dystrophy Association, National Science Foundation, and the NIH.