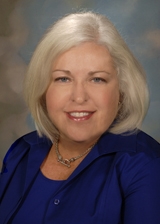 Anita Kinney, PhD, RN, leads the Cancer Control and Population Science Research Program at Huntsman Cancer Institute and is an professor in the Division of Clinical Epidemiology, Department of Medicine at the University of Utah School of Medicine. She holds a Jon and Karen Huntsman Presidential Professorship in Cancer Research and is an epidemiologist with a clinical background as a oncology nurse practitioner. Kinney directs a research team that focuses on discovering ways to ensure optimal translation of genetic and other scientific discoveries to the population as a means of preventing cancer and improving cancer-related outcomes.

As a population scientist, she applies a combination of epidemiology, behavioral science, and clinical perspectives to study cancer-related issues. Her overarching research goal is to understand variation in health outcomes and attitudes, and to use this information to develop effective interventions that facilitate informed decision making and positive changes in health behaviors. Kinney is particularly interested in studying these issues in socially and geographically underserved populations. She is involved with numerous peer-reviewed research studies, including two population-based randomized trials of remote individualized genetic risk communication interventions focusing on rural and other underserved populations who are at increased risk for familial cancer. Kinney and her team hope that the successful completion of these two studies move the field forward in important ways, as findings may have high public health impact on resolving geographic health disparities and increasing access to evidence-based high quality personalized genetic risk interventions for remote populations and be useful to government agencies and third party payers to determine reimbursement policies for telephone-delivered cancer genetic services. Kinney has also directed a research project that examined the impact of Tai Chi, a mind-body intervention, on quality of life, physical fitness, and biological markers among elderly cancer survivors. The study's findings may lead to new discoveries about ways to promote a more positive cancer survival experience in older cancer survivors and how mind-body interventions influence cancer-related outcomes.