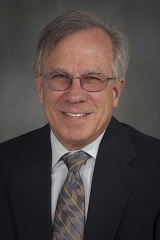 Robert Ward, MD is director of the Pediatric Pharmacology Program at the University of Utah School of Medicine and an attending neonatologist. He conducts studies of medications in pediatric patients and coordinates a group of clinical coordinators who assist other faculty with medication trials. His current studies involve analgesia in newborns and the Neonatal Abstinence Syndrome as well as airway drug metabolism and its potential impact on asthma treatment in children.

Dr. Ward's research focuses on perinatal, neonatal and pediatric pharmacology as well as fetal urinary tract obstruction. Early studies focused on treatment for persistent pulmonary hypertension of the newborn and developmental cardiovascular physiology and pharmacology. From 1989-1997, he served as medical director of the Primary Children's Medical Center NICU. From 1997-2001, he chaired the AAP Committee on Drugs and participated in the drafting of the FDA Modernization Act, the Best Pharmaceuticals for Children Act and the Pediatric Research Equity Act. Since 1999, he has directed the University of Utah Pediatric Pharmacology Program that has coordinated over 70 pediatric studies of all classes of medications in over 900 pediatric patients by over 100 pediatric faculty. From 2003-2009, he served as PI for one of 13 U. S. sites in the NICHD Pediatric Pharmacology Research Unit network. His clinical studies in newborns have ranged from the kinetics of antimicrobials to the effectiveness and safety of proton pump inhibitors to the developmental pharmacology of narcotic analgesics. Along with Steven Kern, PhD and Ralph Lugo, PharmD, he helped design studies of inositol for the NICHD Neonatal Research Network.