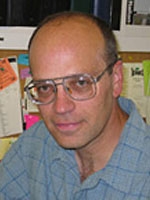 Kent Golic, PhD, is a professor in the department of Biology at the University of Utah. He is an investigator at the Huntsman Cancer Institute and a member of the Nuclear Control of Cell Growth and Differentiation program.

Dr. Golic’s research goal is to understand the cellular responses to telomere loss using Drosophila melanogaster (common fruit fly) as a model. In the male germline, cells that carry a chromosome that has lost a telomere frequently survive, and the non-telomeric end is healed by the addition of a new telomere. Telomeres are protein/nucleic acid structures at the ends of linear chromosomes that prevent the cell from interpreting the end as a DNA double-strand break. In general, when a somatic cell detects that a chromosome is missing a telomere, that cell will undergo apoptosis. This induced cell suicide is useful to prevent the proliferation of cells with damaged genomes, such as cancer cells. However, some cells do escape apoptosis and continue to divide, and this is accompanied by accumulation of genomic damage, a hallmark of most cancer cells. Golic’s lab is identifying and characterizing the genes that regulate these cell growth control pathways.