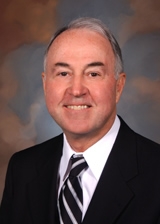 Dr. Stevens completed most of his training in Utah. After completing an internship, he served three years in the U.S. Army during the Vietnam War where he cared for war casualties as an assistant otolaryngologist. Following the completion of his residency, he became the Chief of Otolaryngology at the VA Hospital as well as an assistant Dean of the School of Medicine. He was also a member of the admissions committee and the promotion and tenure committee for the medical school. He became a member of the prestigious Triologic Society after writing a thesis on “Primary Fungal Infections of the Paranasal Sinuses” in 1978. He has been an author or co-author of 75 articles in medical literature, and a teacher for the American Academy of Otolaryngology for 20 years on smell and taste disorders. His part time practice now includes general otolaryngology problems with particular focus on disorders of the sense of smell and taste. He is currently conducting research on improving methods of treating dysgeusia or disturbances of the sense of taste.

Dr. Stevens has a master’s degree in music history and literature. He is a long time supporter of the Utah Symphony and Opera, has six children, and 17 grandchildren. He enjoys playing the piano, singing, skiing and golf.