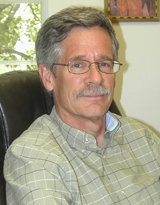 Michael C. Sanguinetti, Ph.D., is a Professor in the Division of Cardiology. His research laboratory is located at the Nora Eccles Harrison Cardiovascular Research and Training Institute. His research interests include cellular cardiac electrophysiology, ion channel biophysics and pharmacology, and the molecular basis of inherited arrhythmia.
Sanguinetti uses biophysical and molecular biological techniques to study the properties of cardiac ion channels. Twenty years ago he determined that mammalian cardiomyocytes expressed two distinct delayed rectifier K+ currents (IKr, IKs) that could be separated based on their differential sensitivity to class III antiarrhythmic agent. This finding provided an understanding of the cellular mechanisms of a new class of highly specific antiarrhythmic agents and somewhat paradoxically, the later understanding that block of IKr is the major cause of drug-induced QT prolongation and associated risk for malignant arrhythmia. Later, in collaboration with Dr. Mark Keating, he described the physiological consequences of mutations in ion channel genes that cause long QT syndrome, an inherited disorder of ventricular repolarization that can cause sudden death. Sanguinetti discovered that hERG proteins coassemble to form the IKr channel, that KVLQT1 a-subunits and KCNE1 ß-subunits coassemble to form the IKs channel. Other significant past discoveries include the mechanisms of hERG channel inactivation, a description of the first IKs activator, molecular determinants of drug binding to hERG, KCNQ1 and Kv1.5 channels, and the molecular mechanisms of CaV1.2 channel dysfunction in Timothy syndrome. Currently, his laboratory is investigating the mechanism of action and the molecular determinants of binding of hERG channel activators, and the molecular basis of activation of Slo2.1, a large conductance, intracellular Na+-activated K+ channel.
Sanguinetti received his Ph.D. in Pharmacology from the University of California, Davis. He received postdoctoral training in biophysics from the University of Rochester. In the past, Sanguinetti was a Professor of Physiology at the University of Utah and served on the editorial boards of Circulation Research, Heart Rhythm, Biophysical Journal, Journal of Cardiovascular Pharmacology, Journal of Cardiovascular Electrophysiology, Journal of Clinical Investigation and Journal of Pharmacology and Experimental Therapeutics. He is currently a reviewing editor of the Journal of Physiology and serves on the editorial boards of the Journal of General Physiology and Cellular Physiology and Biochemistry. He is a member of the Biophysical Society, the Physiological Society London, and the American Society of Pharmacology and Experimental Therapeutics. He is co-editor of the book “Heart Rate and Rhythm: Molecular Basis, Pharmacological Modulation and Clinical Implications” (Springer Verlag).