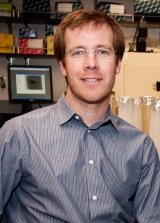 My research interests focus on the development of functional neural circuits. While neurons have been described in great detail at a single cell level, a neuron's functional role in behaving organisms requires an understanding of the neural circuits within which they operate. Description of functional circuits in vertebrates has been difficult to address due to the complexity of the CNS, lack of genetic tools with which to label live neurons in vivo, and other technical shortcomings.

We are developing both genetic tools and transgenic lines of Zebrafish to address these problems. Zebrafish is a small genetically tractable model organism in which the developing CNS can be visualized and analyzed in live behaving fish. We have created modified enhancer-trap constructs that will allow us to create hundreds of lines of unique Zebrafish in which plasmid DNA integrates in a non-biased manner into the genome. Depending on the specific genomic locus of integration, we will be able to visualize specific subsets of neurons and glia, target these cells for destruction, inactivation, or activation, and do so at the developmental time of our choosing. Additional zebrafish tools are being developed in which TALENS mediated mutagenesis is used alongside homologous recombination constructs to target transgenes to specified locations while simultaneously deleting the endogenous gene. These knock-in knock-out lines allow analysis of both loss of function mutations and further manipulations of the targeted cell populations.

I teach pre-clinical medical and dental students in Gross Anatomy and case based learning courses.