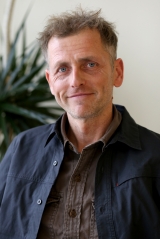 I joined the laboratory of Dr Jared Rutter at the Department of Biochemistry of University of Utah in Summer 2005 as a Research Associate. Before coming to Department of Biochemistry, I was a Postdoctoral Fellow in Huntsman Cancer Institute at the University of Utah studding function of casein kinase I in the Wnt signaling pathway in the laboratory of Prof. David Virshup. This self-assessment summarizes my past and present achievements in research and my future plans.

In the Rutter lab we are particularly interested in understanding how body senses its nutrient and energetic status and how it regulates organismal responses accordingly. Our favourite protein, PASK, is an evolutionarily conserved serine/threonine kinase containing PAS domain and responding through it’s signaling to changing nutritional status of the body. The data so far indicates that PAS kinase is involved in coupling cellular nutrient status with metabolic state, energy storage and growth. PASK has been identified only ten years ago and only limited data are available so far concerning its physiological substrates, partners and molecular mechanism of action. The major expansion of the PAS kinase related projects came when we obtained PASK knockout mice. We have been characterizing these mice since then and have found that they have several interesting metabolic defects. The most important, these mice are protected from high-fat diet induced obesity, insulin resistance and hepatic steotosis. All these could be attributed to hypermetabolism of PASK-/- mice in peripheral tissues as measured by indirect calorymetry and in isolated skeletal muscles. These observations position PAS kinase as the significant regulator of metabolism and energy balance in mammalian systems and potential therapeutic target in context of diabetes and metabolic syndrome’s world-wide epidemic. As a molecular biologist and biochemist I am focused on how cell signaling changes between normal and pathological states of the same system. As a trained biotechnologist and medical biologist I have been always very much interested in the implementation of the basic biology findings into practical application, particularly pharmacological and medical ones. Diabetes and metabolic syndrome epidemic remains one of the most important challenges for human society to cope with, requiring further pursuing of new drugs, therapeutic targets and treatment options. A few years ago we initiated together with Bioenergenix LLC the project to answer the question if PASK-/- phenotype could be implemented and translated into the new drug option for treatment at least some aspects of the metabolic syndrome. The major focus of my research in the lab remains as follow: 1) develop and validate a necessary molecular tools for PASK assessments both in vitroand in vivo, 2) assess the potency, specificity, toxicity of different chemical candidates for PASK inhibitors in mammalian cell systems, 3) validate their properties such as potency, efficacy, toxicity in vivo, both in tissue culture and animal model systems, and 4) investigate molecular mechanism of drug action against PASK. Summary of my activity in developing first-in-class orally-active PAS kinase inhibitors for the treatment of metabolic syndrome so far includes:

-We developed, validate and applied high-throughput in vitrokinase assay in order to screen and characterize the library of 200 000 chemicals as the potential PAS kinase inhibitors.

-We co-partnered (with BioEnergenix LLC) in structure-activity relationship (SAR) – based optimization of the selected compounds in order to improve their chemical and pharmacologic properties.

-We developed, validate and tested more then 500 pre-selected compounds in the cell-based assay in order to test their properties, activity and potency in vivo, in the cells.

- In collaboration with BioEnergenix LLC we characterize the potency, efficacy, selectivity, stability, toxicology, pharmacology and pharmacokinetics of the selected, most promising compounds.

-We developed and applied the RT-PCR based assays in order to follow the inhibitors of PASK activity in both rat and mouse animal models. This allowed us to perform several animal based experiments to investigate the physiological and metabolic consequence of PASK inhibition in the real world of whole animal.

In the process briefly described above we isolated several families of PAS kinase inhibitors with diverse quality of their biological, chemical and pharmacological properties.

We are particularly pursuing one of the families of inhibitors we found called 28 with its representative BioE1115. BioE1115 is the BioEnergenix’s first INS-stage development candidate. We proved through clinically-predictive animal model of metabolic syndrome studies that it restores insulin sensitivity and lowers pathological triglycerides with efficacy superior to that of marketed drugs (e.g. Lovaza). BioEnergenix submitted an IND for BioE1115 for an initial indication of severe hypertriglyceridemia. Other potential future indications include moderate hypertriglyceriddemia, type 2 diabetes, non alcoholic fatty liver disease (NAFLD/NASH). BioE1115 is an orally-active nanomolar-potent and highly selective inhibitor of PASK. In rodent models of metabolic disease, BioE1115 restores insulin sensitivity (comparable with glitazones) with lowering HbA1c and inhibits liver SREBP1c target gene expression with concomitant reduction in circulating triglycerides (far superior to Omega3 fatty acids). BioE1115 and PAS kinase program are protected by strong intellectual property and I have authorship of two of the BioEnergenix patents. I serve as the Principal Investigator on the BioEnergenix sponsored grant “PAS kinase as a novel therapeutic target” and maintain strong collaboration with BioEnergenix’s team of medicinal chemist and pharmacologists. Future directions of my research and collaboration with BioEergenix involve 1) further characterization of the PASK inhibitors focusing on other unrelated to BioE1115 families of compounds, 2) investigation of drug action on PASK and 3) researching potential biomarkers in order to monitor PASK activity in human when the project reach clinical phase of drug development.

As the Research Instructor I have trained several students and supervised group of people working on BioEnergenix sponsored project. I also keep research-related relations with the Department of Biochemistry stuff and faculty.