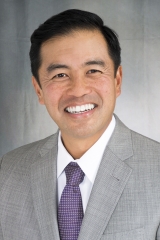 Siam Oottamasathien, MD, FAAP, FACS is a board-certified urologist with subspecialty certification in pediatric urology. He attended the University of Colorado at Boulder studying Molecular Biology and Biochemistry, then obtained his medical degree and completed his urologic residency at the University of Colorado Health Sciences Center. Dr. Oottamasathien pursued a fellowship in pediatric urology at Vanderbilt University, with a special focus on basic science research and inflammatory disorders that affect the bladder. Currently, Dr. Oottamasathien’s practice is dedicated to pediatric urology but he also directs the basic science research efforts for the group. He is a member of multiple medical organizations, including the American Urological Association, Society for Basic Urologic Research, Society for Fetal Urology, and Society for Pediatric Urology. In addition, Dr. Oottamasathien is a Fellow of the American Academy of Pediatrics and Fellow of the American College of Surgeons.

Dr. Oottamasathien launched a pediatric urology basic science research program for the group in 2007. His initial work was in the Department of Human Molecular Biology and Genetics at the University of Utah, investigating the role of T-box proteins in genitourinary development. During that time, he gained invaluable research tools, developed elaborate experimental designs, including the use of germ-line and conditional mutagenesis experiments in mice, and further enhanced his background in genitourinary embryology, molecular biology, and developmental biology. In addition, he was awarded a three year NIH T32 training grant (5T32HL079874) under the auspices of Nobel Laureate Dr. Mario Capecchi and received NIH loan repayment program (LRP) funding for pediatric research. After spending a year and a half along this line of research, more clinical translational science was necessary and he partnered with the laboratory of Glenn Prestwich, PhD, a senior investigator and presidential professor of medicinal chemistry at the University of Utah.

Since establishing his collaboration with Dr. Prestwich, his projects have demonstrated great potential in making a significant impact towards treating pediatric urologic disease conditions. The scientific aspects build upon novel hyaluronic acid (HA)—based biomaterials and have been used to investigate and treat bladder inflammatory and fibrotic conditions. Thus far, he has obtained grant funding from the National Kidney Foundation—Utah Chapter, Early Career Development Award from the Primary Children’s Hospital Foundation, NIH K12 Career Development Award (UL1RR025764) University of Utah Center for Clinical and Translational Science, American Urological Association/Pfizer Award for Investigation in Benign Urologic Disease, Primary Children’s Hospital Integrated Science Award, and an NIH Phase I SBIR Grant (R43DK093413) in conjunction with a small start up company GlycoMira Therapeutics that Dr. Oottamasathien is a part of. Recently, Dr. Oottamasathien received NIH R01 funding to further investigate the treatment of bladder pain by novel glycosaminoglycan derivatives (R01DK100868). Dr. Oottamasathien has also been a three-time recipient (2006, 2010, 2012) of the prestigious Basic Science Research Award presented by the American Academy of Pediatrics Section on Urology. He was also selected in 2013 by the Society of Pediatric Urology as their early career investigator representative and presented his group’s work at the 2013 American Urologic Association Annual Meeting showcasing the best of the best early career investigators. At this forum, he was awarded 2nd place honors. His research efforts continue to represent significant, innovative, and high-impact science that continues to move the field of urology forward.