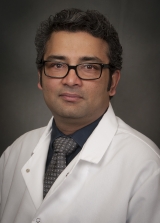 Dr. Chandrasekharan received his PhD in Biology in 2001 from Texas A&M University, College Station, TX. He was a post-doctoral fellow at Vanderbilt University Medical Center in Nashville, TN in Dr. Zu-Wen Sun's lab until 2011. He is currently an Assistant Professor in the Department of Radiation Oncology, and Investigator at Huntsman Cancer Institute, and a member of the Nuclear Control of Cell Growth and Differentiation program.

Dr. Chandrasekharan’s research focus is to understand the regulation and functions of histone modifications that act as epigenetic mechanism and protein homeostasis mechanism, which together control nearly all aspects of organismal and cellular development, and frequently go awry in cancers. He uses budding yeast and mammalian cell culture as model systems of choice for his fundamental as well as cancer-focused studies.

As a graduate student, he investigated how chromatin plays an important role in the spatio-temporal regulation of gene expression during development. His post-doctoral research was to understand the regulation and functions of the evolutionarily conserved crosstalk between histone H2B monoubiquitination and histone H3 lysine-4 and lysine-79 (K4 and K79) methylation. During the course of his post-doctoral studies, he made a novel and rather unexpected discovery that histone H2B ubiquitination stabilizes the nucleosome. He also found that the H2B C-terminal helix modulates H3K4 methylation independent of H2B ubiquitination, by providing a ‘docking site’ for Set1-COMPASS (the methyltransferase-containing complex). As an independent investigator, the primary research objective of his laboratory is to continue his post-doctoral work and further understand the intricacies of the trans-histone crosstalk between H2B ubiquitination and H3 methylation using a structural, biochemical, genetics and genomics based combinatorial approach. His independent research also investigates the intricacies of protein turnover or homeostasis (proteostasis) via ubiquitin conjugation.

Histone-modifying enzymes including those involved in the aforementioned trans-histone crosstalk have garnered much interest in recent times, as they have been implicated in many human diseases including cancers. Also, the connection between deregulated protein homeostasis mechanisms and cancers is well established -- as exemplified by the oncogenic mutations in BRCA1 E3 ubiquitin ligase. Dr. Chandrasekharan’s current research goal is two-fold: first, he intends to understand the fundamental mechanisms of regulation and functions of histone- or protein-modifying enzymes. Second, he intends to utilize the knowledge gained from his studies of fundamental mechanisms to obtain insight into disease formation and progression, and develop effective therapeutics for cancer treatment.