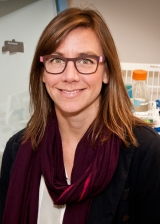 The brain contains billions of cells called neurons that wire together to construct an amazingly complicated circuit. During brain development, neurons form synapses, which are specialized inter-neuronal connections crucial for sending and receiving information. Without synapses, our brains would be useless! In theory, synapses can form wherever one neuron contacts another neuron but, in actuality, synapses only form at a fraction of these sites. This feature generates specificity in neural circuits and is essential for the proper function of the brain. Although we know that specific neural pathways exist, still very little is know about how these specific pathways form during early brain development and what happens (i.e. how would your behavior be modified) if these pathways form incorrectly. Understanding this is the focus of our lab and our experiments are aimed at understanding two main questions. First, how do neurons recognize their appropriate synaptic partners during development? Second, once an appropriate partner neuron has been identified what signals allow the correct type of synapse to be built? To accomplish these scientific goals, the lab uses a variety of molecular techniques including transgenics, viruses, biochemistry, light and EM microscopy.

Synaptic Specificity - We use the hippocampus as a model system to study circuit formation in the central nervous system. The hippocampus is a small brain region in mammals with a well-established role in learning and memory. Three principal cell types form a largely unidirectional circuit where information flows from dentate gyrus (DG) to CA3 to CA1 regions. Although it is long appreciated that neurons in the hippocampus form specific connections, the size and complexity of the mammalian brain makes investigating synaptic specificity a very challenging task. As a result, many theories on how neurons develop specific connections exist but few are supported by experimental evidence.To address this, we developed two in vitro assays to study selectivity during hippocampal circuit formation. In this assay, cultured neurons are immunostained using cell and synapse-specific markers that uniquely identify subtypes of excitatory synapses. Surprisingly, we discovered that, in contrast to the common perception that specificity is lost in dissociated neurons, cultured DG neurons retain a robust synaptic preference for appropriate CA3 target neurons. Cultured neurons are conducive to genetic and pharmacological manipulations and therefore, these assays provide unprecedented tools for investigating the molecular basis of synaptic specificity.

Cadherins in synapse formation - How do cells communicate with each other to identify suitable synaptic partners? We hypothesize that differentially-expressed, cell adhesion molecules capable of spanning cell membranes play a role in this process. Using our in vitro assays described above we conducted a screen to identify cell adhesion molecules required for specific types of synapse formation and identified cadherin-9, a cell adhesion molecule expressed exclusively by DG and CA3 neurons that is not present on CA1 neurons. In vitro and in vivo experiments revealed that reducing cadherin-9 expression severely affects the formation of DG synapses but does not affect other types of synapses. Ongoing experiments are aimed at understanding how cadherin-9 regulates this process and investigating the role of other cadherins in synapse formation.

Synapses and disease - It is now becoming clear that many cognitive, social, and mental disorders are not caused by massive malformations of the brain but instead by subtle morphological or functional changes in specific types of synapses and our synaptic specificity assays are well-suited to uncover such changes. Many genes involved in synapse development, including the cadherins, have been linked to neurological disorders by genome-wide associational studies in humans but the cellular basis of how these genes may cause disease remain virtually unknown. Therefore, one aspect of the research in our lab is aimed at understanding the cellular mechanisms by which disease-associated genes affect synaptic development and subsequently the behavior of the animal. This is an important first step toward identifying potential drug targets and developing more effective therapies and treatments for disorders of the brain.

Our long-term goal is to elucidate the molecular mechanisms used by neurons to form highly specific circuits in the brain. To form specific circuits, neurons must distinguish correct from incorrect partners and then assemble the appropriate type of synapse. Defects in this process are thought to underlie cognitive and psychiatric disorders yet we currently have little mechanistic understanding of how neurons achieve synaptic specificity.