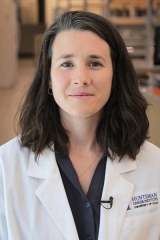 Biography: Dr. Oliver received her PhD from Duke University in 2005 in Pharmacology and Cancer Biology as a graduate student in Dr. Rob Wechsler-Reya's lab. In 2005, she studied in Dr. Terry Van Dyke's lab as a Postdoctoral Associate at the University of North Carolina-Chapel Hill for six months. She then completed a Postdoctoral Fellowship (2006-2011) in Dr. Tyler Jack's lab at the Koch Institute for Integrative Cancer Research at Massachusetts Institute of Technology (MIT), Boston, MA. Dr. Oliver joined the University of Utah and Huntsman Cancer Institute in 2011. She is now Associate Professor with tenure and a Huntsman Cancer Institute Endowed Chair in Cancer Research in the Department of Oncological Sciences. Dr. Oliver has received many awards including a Valedictorian scholarship from Oklahoma Baptist University, a National Science Foundation graduate student fellowship, and two postdoctoral fellowships from ASPET-Merck and the Ludwig Foundation at MIT. As an independent investigator, she has received awards from the Damon Runyon Cancer Research Foundation, the V Foundation for Cancer Research, American Cancer Society, American Lung Association and the Lung Cancer Research Foundation. She has served as an Associate Scientific Advisor for Science Translational Medicine.

Research: Dr. Oliver's research is devoted to understanding mechanisms of cancer biology with a focus on lung cancer. As a graduate student at Duke, she studied the developmental origins of the childhood brain tumor, medulloblastoma, where she identified mechanisms of tumor progression in mouse models of the disease. As a postdoctoral fellow at MIT, she studied mechanisms of chemotherapy resistance in lung cancer. As an independent investigator, she has developed novel mouse models of squamous and small cell lung cancer. Her experimental approaches include an integration of mouse genetics, molecular and cellular biology, biochemistry, genomics, preclinical therapeutics, and in vivo imaging. This work will contribute to our understanding of lung cancer subtypes with the goal of identifying novel targets to improve patient outcome.

Teaching and Mentoring: Dr. Oliver has been active in graduate student and medical school teaching. She co-taught a class with Dr. Bryan Welm on Development and Cancer, and gives regular lectures on the topics of apoptosis & cell death pathways, transcription factors in cancer including MYC and p53, and kinase signaling and targeted cancer therapeutics. Dr. Oliver's trainees have received a number of prestigious awards. These include the Susan Cooper Jones Postdoc of the Year Award, the James W Prahl Memorial Graduate Student of the Year award, an NIH NCI F99/K00 Predoctoral to Postdoctoral Fellow Transition Award, and the School of Medicine Undergraduate of the Year award. In addition, Oliver lab trainees have won a number of travel awards including to Keystone Symposia, the John Weis Memorial Graduate Student Award, and selection as a recipient to the 68th Annual Lindau Nobel Laureate meeting in Germany.

Administration: Dr. Oliver is an active member of the Cell Response and Regulation program. Dr. Oliver has served on the Molecular Biology PhD program Admissions and Advising Committees. She has served as Co-Chair for the Department of Oncological Sciences junior faculty search committee and has contributed to HCI's small animal imaging capabilities through multiple efforts. She currently serves as a member of the Clinical Research Executive Committee and the Department of Oncological Sciences Executive Committee.