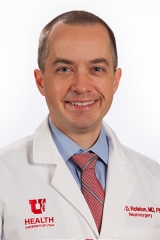 Dr. John Rolston is a neurosurgeon and neuroscientist at the University of Utah, where he is the Director of Epilepsy Surgery and Director of Stereotactic and Functional Neurosurgery. Clinically, he specializes in epilepsy surgery, deep brain stimulation (DBS) for movement disorders (Parkinson’s, dystonia, tremor), focused ultrasound, trigemi... Read More