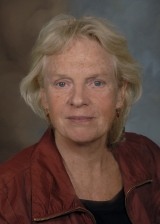 Margaret Pabst Battin (nicknamed Peggy) is Distinguished Professor of Philosophy and Adjunct Professor of Internal Medicine, Program in Medical Ethics and Humanities, at the University of Utah. She is a graduate of Bryn Mawr College, and holds an M.F.A. in fiction-writing and a Ph.D. in philosophy from the University of California at Irvine. The author of prize-winning short stories and recipient of the University of Utah’s Distinguished Research Award, she has authored, co-authored, edited, or co-edited some twenty books, among them a study of philosophical issues in suicide; a scholarly edition of John Donne’s Biathanatos; a collection on age-rationing of medical care; Puzzles About Art, a volume of case-puzzles in aesthetics; a text on professional ethics; Ethics in the Sanctuary, a study of ethical issues in organized religion; and a collection of her essays on end-of-life issues, The Least Worst Death. She has also been engaged in research on active euthanasia and assisted suicide in the Netherlands. She has also published Ethical Issues in Suicide, trade-titled The Death Debate, as well as several co-edited or co-authored collections, including Drug Use in Euthanasia and Assisted Suicide; Physician-Assisted Suicide: Expanding the Debate; Praying for a Cure, a jointly authored volume on the ethics of religious refusal of medical treatment; and Medicine and Social Justice. In 1997 she received the University of Utah’s Distinguished Research award, and in 2000, she received the Rosenblatt Prize, the University of Utah’s most prestigious award. She was named Distinguished Honors Professor in 2002-03. A second collection of her essays (and fiction) on end-of-life issues, entitled Ending Life, was published in spring 2005 by Oxford University Press. She is the lead author of two multiauthored projects, Drugs and Justice: Seeking a Consistent, Coherent, Comprehensive View (Oxford, 2008) and The Patient as Victim and Vector: Ethics and Infectious Disease (Oxford, 2009). She is the general editor of The Ethics of Suicide: Historical Sources (Oxford 2015), an extensive sourcebook coupled with an online Digital Archive hosted by the J. Willard Marriot Library at the University of Utah, freely available at <ethicsofsuicide.lib.utah.edu/>. She has worked closely with the American Association of Suicidology on its statement, issued in 2017, that “suicide” is not the same as “physician aid in dying.” She is currently completing Sex & Consequences, a book on large-scale reproductive issues, including world population growth and reproductive rights; a jointly-authored volume of case puzzles about disability; and on a set of novel considerations about urban design in the light of ecological, environmental, resource-use, and social issues, called “How to Live in an Italian Hill Town and Still Get to Walmart.” She has been named one of the “Mothers of Bioethics.”