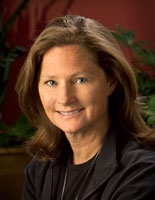 Jamie came to the University of Utah Medical Center in 1988 and worked in the Departments of Pediatrics, Obstetrics and Gynecology and the Huntsman Cancer Institute's Hereditary Cancer Clinics before focusing on Hereditary Hemorrhagic Telangiectasia (HHT). In 1995 she helped establish the multidisciplinary University of Utah HHT Center which she serves as a co-director. Jamie worked to establish the HHT Clinic at the University of Utah Medical after becoming convinced through personal experience that families with this relatively common genetic disorder needed a center of expert, multidisciplinary care in the western states. Jamie, her two children, and many other family members have HHT.