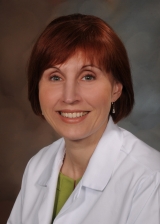 Victoria Jacobs, APRN, is working in Electrophysiology, treating patients with various cardiac arrhythmias, and focusing on atrial fibrillation, pacemakers, and defibrillators. She is interested in a variety of cardiovascular diseases, preventions, and patient education.

After receiving a Baccalaureate degree in Nursing, Victoria was employed in a Long-Term Care facility and later in an Emergency Department as a Registered Nurse. During her tenure in the Emergency Department, she attended and completed her graduate studies, and received a Master’s degree in Nursing as a Family Nurse Practitioner in 2006. Then as a nursing instructor in a Baccalaureate Nursing Program, she emphasized and contrasted the differences between the nursing care requirements of older adults versus middle aged individuals, due to the presence of complex chronic problems.

Subsequent to that, Victoria worked as a Nurse Practitioner at the Huntsman Cancer Hospital, then the Foothill Family Practice clinic, followed by approximately 5 years working at a General Cardiology clinic, while also staffing at 2 hospitals. In 2011 she received her Gerontological Nurse Practitioner Certification, and currently holds dual certifications.

Victoria is interested in research and has worked on an NIH-NIA funded study, an intervention study, comparing two forms of exercise used in strengthening muscles and preventing falls, in a population of high risk older adults. This research program has allowed Victoria to expand her experience through learning data collection methods, research–related contact with patients, data analysis, research dissemination and collaboration, while working within a team. She has also performed both podium and poster presentations related to this study.