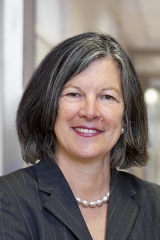 CEO, Huntsman Cancer Institute at the University of Utah

Mary C. Beckerle, PhD, has served as CEO of Huntsman Cancer Institute (HCI) at the University of Utah (U of U) since 2006. She is the associate vice president for cancer affairs at U of U Health, and she is a distinguished professor of biology and oncological sciences at the U of U. Beckerle joined the faculty of the U of U in 1986, and currently holds the Jon M. Huntsman Presidential Endowed Chair. She earned her PhD in molecular, cellular, and developmental biology from the University of Colorado at Boulder, where she was the recipient of a Danforth Fellowship, and completed post-doctoral research at the University of North Carolina at Chapel Hill.

Beckerle’s research has defined a novel molecular pathway that regulates mechanotransduction and cell motility, and her lab has contributed to understanding the impact of this pathway on tumor progression, particularly in Ewing’s sarcoma. Her scientific work has been continuously funded by the National Institutes of Health (NIH) and the American Cancer Society for over 30 years. She guided graduate education at the U of U as the director of the Interdepartmental Graduate Program in Molecular Biology for two years. In addition, Beckerle developed the Multidisciplinary Cancer Research Training Program at HCI and served for several years as the principal investigator of the National Cancer Institute (NCI) grant that supported this cancer-focused training initiative. Beckerle served as cancer center director and principal investigator of HCI’s Cancer Center Support Grant from 2006-2018, during which she led the process that resulted in HCI being designated as a Comprehensive Cancer Center, the highest recognition possible by the NCI.

An active participant in national and international scientific affairs, Beckerle served as president of the American Society for Cell Biology in 2006. She has served on the NIH Advisory Committee to the Director, on the NCI Scientific Review Group Subcommittee A (Parent Committee) for Cancer Centers, as Chair of the American Cancer Society Council for Extramural Grants, on the Coalition for Life Sciences Board of Directors, and the Board of the Mechanobiology Institute in Singapore. In 2013, she was elected to the Board of Directors of the American Association for Cancer Research.

Beckerle currently serves on the Medical Advisory Board of the Howard Hughes Medical Institute, the Management Board of the National Centre for Biological Sciences in India, and the External Advisory Boards of several NCI-designated comprehensive cancer centers. Beckerle is a member of the Board of Directors of Huntsman Corporation and Johnson & Johnson. In 2016, she was appointed to the National Cancer Moonshot Initiative Blue Ribbon Panel, a team charged with identifying strategies to best advance the scientific themes of Vice President Biden’s “cancer moonshot” initiative; she co-chaired the working group on Precision Prevention and Early Detection. In 2018, the American Academy of Arts and Sciences appointed Dr. Beckerle to the Advisory Committee on Science, Engineering, and Technology. She is also a member of NCI’s Board of Scientific Advisors since 2018.