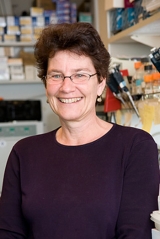 The inner ear, which mediates the sensations of hearing and balance, is derived almost entirely from the otic placode, a small patch of ectodermal cells that is specified for an otic fate early in fetal development. Through a series of tissue interactions that are mediated by secreted signaling molecules, otic cells undertake complex processes of morphogenesis and differentiation to achieve their final functional form. Abnormalities of these processes lead to congenital deafness, which is the most common human sensory disorder. To better understand these disorders, my laboratory employs genetic and molecular approaches to identify and characterize genes that are important for the development and/or function of the mouse inner ear.

Fibroblast growth factor (FGF) signaling plays critical roles in early inner ear development. Disruption of either Fgf3 or Fgf10, which encode ligands that signal through the same FGF receptor isoforms, FGFR1b and FGFR2b, leads to defects of mouse inner ear morphogenesis. Fgf3 is required from the adjacent hindbrain to direct dorsal otic gene expression and induction of the endolymphatic duct. Fgf3 null mutants develop cystic inner ears and exhibit both hearing and vestibular dysfunction. Fgf10 is required for both posterior semicircular canal development and differentiation of cochlear non-sensory tissues that would undoubtedly cause hearing and balance dysfunction if the mice survived. Fgf3/Fgf10 double null mutants have no ear development at all, showing that these genes are required redundantly for the initial induction of the otic placode. We used conditional mutants to dissect the tissue origins of these inductive FGF signals. In addition, microarray comparisons of control and FGF-deficient otic placodes revealed transcriptional targets of FGF signaling that are required for subsequent development of the inner ear.

Inactivation of Fgf3 and Fgf10 alleles specifically within the otic epithelium and induction of a ubiquitously secreted, dominant-negative (dn) form of FGFR2b, revealed dosage sensitive roles for these genes in directing otic neurogenesis as well as in both cochlear and vestibular morphogenesis. Differential RNA-seq analysis of dissected otic epithelium from control and dnFGFR2b embryos revealed novel up and down-regulated target genes that are the subject of current functional studies as potential hearing loss genes (Urness et al., 2018 BioRxiv 430876 preprint).