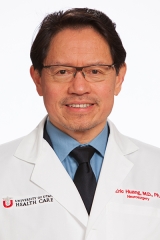 Our research efforts are directed towards understanding the mechanisms underlying malignant progression, a seemingly inevitable process that results in therapeutic failure and patient death. Malignant progression requires genetic, epigenetic, and metabolic alterations that enable tumor cells to evolve and acquire aggressive malignant properties. My lab focuses on malignant progression of glioma, the most common and deadly form of human brain cancers, by conducting research in the following areas:

Previous studies from my lab and others have indicated a critical role for hypoxia (low oxygen tension) in malignant progression. We first demonstrated in cell culture models that the hypoxia-inducible factor 1α (HIF-1α), a master regulator of oxygen homeostasis, induces genetic alterations by inhibiting DNA repair. At the molecular level, we identified a novel mechanism that accounts for the hypoxic suppression of DNA repair via the Myc pathway. To demonstrate in vivo effects of HIF-1α on genetic alteration, we have adopted the RACS/TVA mouse model to test our hypothesis that HIF-1α overexpression drives glioma progression by inducing genetic alteration.

Metabolic reprogramming is an adaptive response critical for the survival and proliferation of cancer cells through the reduction of glucose oxidation (the Warburg effect) and diversion of glycolytic metabolites for the synthesis of macromolecules. The mitochondrial pyruvate carrier (MPC) protein complex, consisting of MPC1 and MPC2, is essential for pyruvate transport into mitochondria. In most human cancers, MPC1 is frequently deleted or down-regulated and, furthermore, the MPC activity is low, which is consistent with the concept of Warburg effect. The role of MPC in malignant glioma, however, seems more complex, as indicated by our bioinformatics analysis of patient data and experimental data. We hypothesize the cerebral cortex provides a unique microenvironment for tumor cell survival and we are actively testing this hypothesis in order to identify metabolic vulnerabilities of glioma cells that can be used for therapeutic intervention.

The cytosolic isocitrate dehydrogenase 1 gene (IDH1) catalyzes the conversion of isocitrate to 2-oxoglutarate concomitant with the production of NADPH. IDH1 mutations at Arg132 are most common in human glioma, particularly in lower-grade gliomas. Mutant IDH1 converts 2-oxoglutarate to 2-hydroxyglutarate, a potent inhibitor of 2-oxoglutarate-dependent histone demethylases and the TET family of 5-methylcytosine hydroxylases. Consequently, IDH-mutant gliomas exhibit a CpG island methylator phenotype resulting from histone and DNA hypermethylation. The current prevailing hypothesis is that mutant IDH1 acts as an oncogenic driver of glioma genesis, which is difficult to account for much improved overall survival of patients with IDH-mutant glioma than those with IDH-wildtype glioma. Our analysis of patient and experimental data, however, has led to a disparate hypothesis, i.e., the mutation of IDH1 is a protective response from the affected cells to retard oncogenic transformation and progression, yet attenuation of the epigenetic change is likely an escape mechanism that drives eventual progression of glioma. We have devised various approaches to the test of our hypothesis and furthermore have developed an interest in identifying risk factors specific to IDH-mutant patients for early intervention.