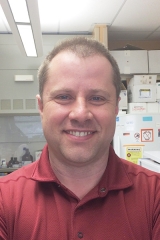 Matthew Williams, PhD, is an Associate Professor in the Department of Pathology, Division of Microbiology and Immunology at the University of Utah, and he is currently serving as the C. Scott and Dorothy E. Watkins Endowed Chair in Honor of Ernst J. Eichwald, MD (2018-2021). He is also a member of the Cell Response and Regulation program within the Huntsman Cancer Institute. The Williams laboratory studies T cell differentiation and function in response to infections and tumors. Dr. Williams recieved his PhD from Emory University in 2002. While there, he focused on the role of infectious history in disrupting the efficacy of costimulation blockade-induced transplant tolerance. He later moved on to post-doctoral work in the laboratory of Dr. Michael Bevan at the University of Washington, where he studied the role of Interleukin-2 in promoting the differentiation and function of long-lived T cell memory. Dr. Williams moved to the University of Utah in 2007.

Following viral or bacterial infection, numerous components of the immune response play a role in recognizing, engaging and eradicating the offending pathogen. T cells are particularly central to protection from a wide variety of infections. A key hallmark of protective T cell responses is the long-lived (in many cases life-long) persistence of memory T cells after the pathogen is cleared. Because memory T cells are present at elevated frequencies and recognize the pathogen quickly, they are able to provide rapid protection upon encountering the same pathogen a second time. While many successful vaccines of the past have relied on the development of antibody responses for their protective effect, future disease challenges will require the induction of cell-mediated protection provided by T cells. The research focus of the Williams laboratory is to understand the nature of T cell intrinsic signals, such as the T-cell receptor, and T cell extrinsic signals, such as inflammation, in promoting the ability of T cells to acquire the functions that allow them to eradicate pathogens and form long-lived immunological memory.

A major obstacle in harnessing the immune system to combat cancer is the ability of many tumors to inhibit T cell function. The Williams laboratory is engaged in basic and pre-clinical studies to understand the mechanisms that tumors use to suppress T-cell responses. The end goal is to improve upon existing immune-based therapies to induce long-lived, highly functional anti-tumor memory T cells that promote durable cancer remission.