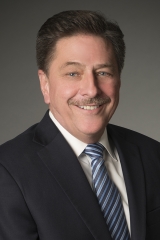 Gregory S. Hageman, PhD, is the John A. Moran Presidential Professor of Ophthalmology and Visual Sciences at the University of Utah John A. Moran Eye Center. He serves as the Executive Director of Moran’s Steele Center for Translational Medicine (SCTM), which was created to exploit a repository of patient and tissue resources and foster a robust understanding of age-related macular degeneration (AMD) biology to discover pathways, identify and validate therapeutic targets, and develop therapies for early-stage AMD.

Dr. Hageman is a graduate of the University of Southern California, where he conducted his undergraduate and graduate studies in biology and marine biology. Prior to relocating to Utah, he served as the Iowa Entrepreneurial Professor and Director of the Cell Biology and Functional Genomics Laboratory at the University of Iowa. He has also held appointments as Professor Universite Descartes Paris and Associate Faculty in the Center for the Study of Macular Degeneration, University of California, Santa Barbara, and has received honorary professorships at Queen’s University, Belfast, U.K., and the Shandong Eye Institute, Qingdao, China.

Dr. Hageman’s primary research interest over the past 30 years has been directed toward the genetics and biology of AMD, a leading cause of irreversible worldwide blindness. Dr. Hageman and his colleagues discovered that a specific common haplotype of the complement regulator, Complement Factor H (CFH), in combination with variations in another complement regulator, Complement Factor B (CFB), account for greater than 50% of risk for AMD in Caucasian populations. More recently, he has generated strong ocular and systemic evidence that AMD is at least two biologically distinct diseases. Dr. Hageman garnered contiguous funding from the National Eye Institute/National Institutes of Health for more than 25 years. He was the principal investigator of a $14.7M R24 translational award supported by NIH/NEI and involving colleagues from 12 participating national and international institutions.

Dr. Hageman and colleagues founded Voyant Biotherapeutics, a biotechnology company that is partnering with the Moran Eye Center to efficiently capitalize the commercialization of scientific discoveries made within the SCTM. Voyant mediated a unique collaborative partnership between the SCTM, Voyant, and Allergan in December 2012 to identify targets for gene-directed AMD. Most recently, Voyant closed a Series A financing round to expedite the pace of development of novel AMD therapeutics; a Phase I trial of one therapeutic is anticipated in 2021. Dr. Hageman serves as the CSO and a Board Member of Voyant.

Greg and his wife, Jill, have been married for 40 years. They have two wonderful children, Courtney and Nicholas, who currently live in Oregon and Iowa.