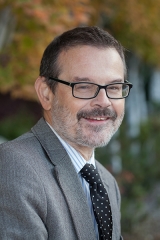 Michael Deininger, MD, PhD, is an Adjunct Professor of Hematology and Hematologic Malignancies in the Department of Internal Medicine at the University of Utah. He has extensive experience treating patients with blood cancers. He has a particular interest in chronic myeloid leukemia (CML) and myeloproliferative neoplasms, a group of blood cancers related to leukemia.

Dr. Deininger received his MD from the University of Würzburg Medical School, Germany, in 1990. Throughout his studies, he was funded by the prestigious German Scholarship Foundation. He subsequently trained in Internal Medicine and Hematology/Oncology. In 1995 he obtained a grant to enroll in the PhD program at Imperial College, London. His thesis work focused on signal transduction and the potential use of imatinib (Gleevec) as molecularly targeted therapy for CML. After returning to Germany he completed a fellowship in stem cell transplantation at the University of Leipzig Medical Center. In 2002 he was recruited to the Division of Hematology and Medical Oncology at Oregon Health & Science University as an Assistant Professor. In 2007 he was promoted to the rank of Associate Professor and became the Head of the Hematologic Malignancies Section at OHSU. In August 2010 Dr. Deininger became the M.M. Wintrobe Professor of Medicine at the University of Utah and was appointed Chief of the Division of Hematology and Hematologic Malignancies. He was also appointed Senior Director for Transdisciplinary Research at Huntsman Cancer Institute. He was selected as the inaugural Director of the Huntsman Center for Excellence in Hematology and Hematologic Malignancies.

In April 2021, Dr. Deininger left his role at the University of Utah and joined the Milwaukee-based Versiti Blood Research Institute as Executive Vice President, Chief Scientific Officer, and Director. He retains a position as Adjunct Professor at the Adjunct Professor of Hematology and Hematologic Malignancies in the Department of Internal Medicine.

As a clinician-scientist trained in hematology/oncology as well as molecular biology I have been interested in the biology and therapy of leukemia and myeloproliferative neoplasms (MPNs) for more than 20 years. I have led an extramurally funded laboratory for 15 years and have assembled a team of researchers and technicians that provides an excellent training environment. Our technical expertise encompasses molecular and cellular biology, chemistry and chemical biology, murine leukemia models and ex vivo analysis of primary leukemia cells (we have established a substantial biorepository with >20,000 samples from >1,200 patients). We have made a number of contributions to our field of study that have influenced how leukemia and MPNs are diagnosed, treated and monitored. I have played an important role in multiple clinical studies in MPNs, including chronic myeloid leukemia (CML) that contributed to the establishment of tyrosine kinase inhibitor (TKI) - based therapies as the standard of care. Today our work continues, focusing on novel therapeutic targets in leukemia, novel drugs to overcome TKI resistance in CML and other MPNs, and to understand the role of bone marrow micro environment for leukemogenesis. Over the years I have trained and mentored a number of pre- and postdoctoral students and clinical fellows. Several of my trainees have secured faculty positions at major academic institutions in Europe or the US, and have attracted extramural funding to establish their own independent research groups. Having been involved in research for many years the success of my trainees has become a key measure of my own achievement. I profoundly enjoy the opportunity to get inspired by young investigators setting out to develop their research careers and I am determined to help them on their path to independence.