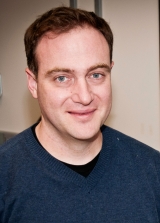 Despite their relatively small numbers, modulatory neurons contribute to an overwhelming number of essential behaviors. My lab exploits the relative simplicity of the larval zebrafish brain to understand how neurons that produce the neuromodulators dopamine and oxytocin shape locomotion, pain processing, learning, and social behavior, and in the process derive general principles for the operation of modulatory circuits. There are currently three, specific projects in the lab.

Normal dopamine function is essential for locomotion in all vertebrates. We have discovered that a population of dopamine neurons in the fish hypothalamus, defined by expression of tyrosine hydroxylase 2, is strongly activated during all forms of swimming behavior and promotes movement by sensitizing locomotor networks to sensory input. We are using a combination of molecular, microscopic, and optogenetic techniques to identify the targets of these neurons and describe how dopamine signaling shapes their activity to control locomotor output.

Although better known for its social functions, the modulatory neuropeptide oxytocin is central to many aspects of pain-related behavior. In collaboration with Caroline Wee and Florian Engert (Harvard University), we have discovered that acute activation of oxytocin neurons by painful stimuli promotes defensive swimming. We now seek to understand how coordinated oxytocin and glutamate release from these neurons affects downstream locomotor targets to elicit such specific behavior.

The zebrafish has become a popular experimental model owing largely to its transparency during larval stages of development, which enables optical interrogation of every neuron in the brain. However, larval fish are behaviorally immature, making social behavior, reward learning, and other important phenomena impossible to study. To investigate these behaviors using the full repertoire of imaging and optogenetic techniques, we are developing the zebrafish relative Danionella translucida as an experimental model. These fish are pedomorphic, remaining small (~10 mm long) and optically transparent into adulthood. The establishment of molecular, behavioral, and optical techniques in this species will allow us to understand how oxytocin and other modulators shape a variety of sophisicated behaviors.