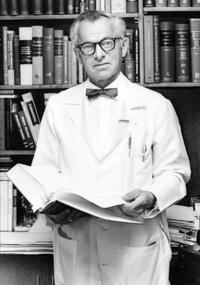 In 1943, the School of Medicine of the University of Utah changed from a 2-year preclinical program to a 4-year degree-granting program, and Dr. Maxwell M. Wintrobe was among a handful of outstanding physicians recruited to spearhead this challenging initiative.  Even at that time, Dr. Wintrobe was recognized as one of the world's foremost hematologist.  He received his M.D. from the University of Manitoba where he graduated first in the class of 1925.  Following his internship and a medical-biochemistry fellowship at the University of Manitoba, he accepted a faculty position in the Medical School of Tulane University in New Orleans.  The Chief of Medicine at Tulane was Dr. John Musser, Jr., an editor of the Tice Practice of Medicine, and he asked Dr. Wintrobe to write a section in that textbook on Diseases of the Blood.  This request apparently inspired Dr. Wintrobe's interest in hematology, thereby launching one of the most innovative and productive careers in the history of the field. While at Tulane, he developed the now-famous Wintrobe Hematocrit Tube.  Observing that there were no reliable normal blood values to use in clinical practice, he was the first to document statistically normal values in adults and children.  An important part of this effort was the derivation of the red blood cell indices that remain today, the cornerstone of the morphological classification of anemia.   While earning his   Ph.D. degree at Tulane, Dr. Wintrobe became intensely interested in the nutritional requirements necessary for effective erythropoiesis.  His thesis work formed the basis of later studies that both established the role of pyridoxine as a cofactor for aminolevulinic acid synthase and defined the important roles of iron and copper in red cell metabolism.  Dr. Wintrobe was recruited to the faculty at Johns Hopkins University in 1930 and remained there for 13 years.  While in Baltimore, he recognized the Mendelian mode of transmission of Cooley’s anemia (thalassemia) and described the phenotype of thalassemia minor.  It was also during his tenure at Hopkins that he single handedly authored the first issue ofClinical Hematology, an exhaustively and meticulously referenced 792-page textbook.  For the first six editions of Clinical Hematology, Dr. Wintrobe remained the sole author, and it was not until the 7th Edition that five of his former fellows were appointed as co-editors.

In 1943, Dr. Wintrobe became the University of Utah’s first Chair of Medicine at the newly formed four-year medical school.  He recruited an outstanding faculty, including his long-term partner in research, Dr. George Cartwright.  While in Salt Lake City, Dr. Wintrobe published important studies on the effects of nitrogen mustard, folate antagonists and adrenocorticosteroids on the hematopoietic system. He and Dr. Cartwright were the first both to characterize the anemia of chronic inflammation and to demonstrate the associated abnormalities of iron metabolism.  He was awarded the first extramural grant funded by the NIH.  The specific aims of the grant were broad, as he proposed to study both muscular dystrophy and inherited disorders of the blood.  He established one of the country’s earliest hematology training programs.  Over 80% of the fellows who trained in this unique program went on to independent careers in medical schools and research institutes around the world.  Dr. Wintrobe demanded much of his trainees but never more than he demanded of himself.