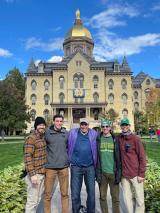 Following 6 years of arduous albeit enjoyable General Surgery residency training in SLC from 1980-86 (including one year of burn trauma/immunology research with Glenn Warden), I completed a 2-year multi-organ transplant surgery fellowship at the U of Wisconsin-Madison.  I was fortunate enough to train with two giants in transplantation while at Wisconsin, Folkert Belzer and Hans Sollinger.  I then joined the general surgery faculty at the University of Nebraska that included Utah alumni Bing Rikkers (Chairman of General Surgery) and Bud Shaw (Director of Transplantation).  I performed kidney, pancreas, and liver transplantation during my first 3 years at Nebraska and then specialized in kidney and pancreas transplantation thereafter.  After 8 years in Nebraska, I joined the transplant surgery group at the University of Tennessee-Memphis for the next 5 years.  In Memphis, I learned a novel technique of pancreas transplantation (portal venous and enteric exocrine drainage) from Drs. Gaber and Shokouh-Amiri, who initially pioneered the technique.  I continue to practice this technique of pancreas transplantation at present.

During my time in Nebraska and Memphis, I played amateur baseball in the Men’s Senior Baseball League and participated in several World Series.  In 2000, I was enshrined into the Little League Hall of Excellence (along with Kevin Costner), in part because I had pitched a no-hitter in the Little League World Series in 1967.  I was recruited to Wake Forest in 2001 as the Director of Transplantation and Professor of Surgery, a position that I have held for the past 21 years.  I am also a Professor of Urology and Professor at the Wake Forest Institute of Regenerative Medicine.  In 2017, I was the inaugural recipient of the Jesse H. Meredith, MD, Chair in Transplant Surgery.  In 2021, I was the recipient of the Richard C. Lillehei Memorial Lecture Award conferred by the International Pancreas and Islet Transplant Association.  My areas of research interest include kidney and pancreas allocation and transplantation, immunosuppressive strategies, organ donation and preservation, and utilization of marginal donors.  I have performed more than 2500 kidney and 500 pancreas transplants in my career.  I continue to work full-time, and health permitting, I would like to work for at least another 5 years clinically before transitioning to full-time administrative, teaching, and academic responsibilities.  They say that retirement is doing what you want whenever you want to do it, so that’s the plan for now. 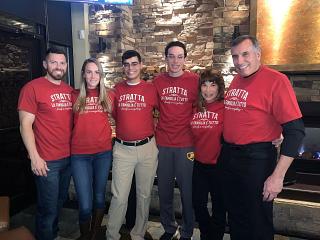 I have 4 sons and one daughter (the oldest son and daughter were born in Utah).  My wife Kathy “runs the ship” and has done a great job of raising our 3 youngest sons.  My daughter Erin is trained as a family physician but currently works for Doctors without Borders/Medecins Sans Frontieres.  My youngest son is a premedical student at Wake Forest and may follow in the medical footsteps as well.  I have coached all 4 sons in baseball over a span of about 20 years; 3 of whom played baseball through high school.  I was never a good skier and still cannot play golf very well (even though I try at least weekly), but I do enjoy the outdoors and have been back to the intermountain west on several occasions to visit the national parks.  When I moved from Chicago to Utah in 1980, it was a dramatic change for me but I have many fond memories of my time in Utah and the people that I came to know.  Two of my fellow Utah general surgery residents are John Hunter and Nat Soper, both of whom became Chairman of General Surgery.  My initial exposure to transplantation came from Ed Nelson and Gary Maxwell, and I could never keep up with them either in the O.R. or whenever we went out jogging together.

I feel extremely privileged to have had the opportunity to be a University of Utah General Surgery resident because my training and time there was certainly transformative, inspirational, and provided a solid foundation for a successful career in transplantation. I miss the mountains, I miss the people, and I am very proud of my Utah pedigree.