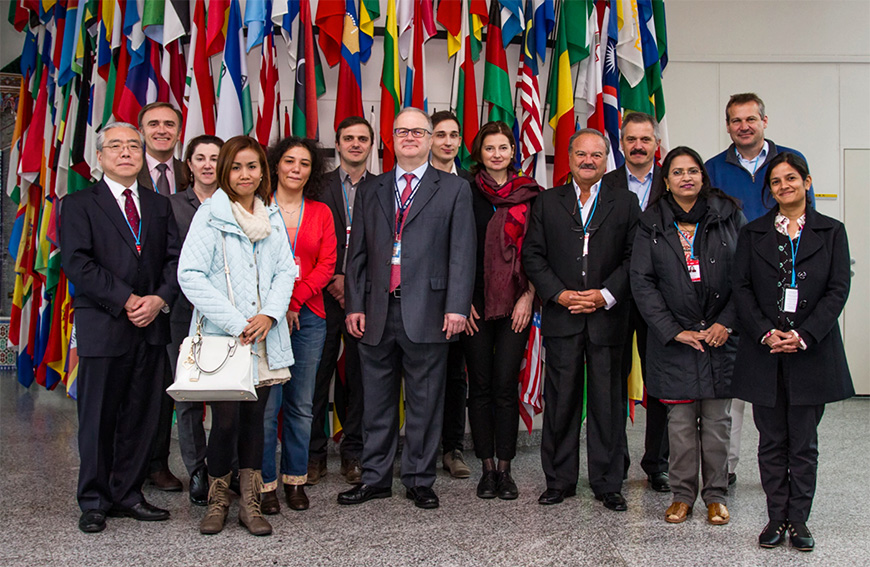 There’s an inherent injustice in the way medical technology is widely available in more affluent countries yet difficult to access, afford, and even use successfully in developing nations. Thankfully, many have dedicated themselves to bridging this gap – one organization is the International Atomic Energy Agency (IAEA), and one individual is the Chair of the Department of Radiology and Imaging Sciences at University of Utah Health, Satoshi Minoshima, MD, PhD.

Minoshima is an expert in nuclear medicine and molecular imaging, where radioactive “tracers” are engineered to bind to specific molecules in the body and then studied to reveal how processes work over time. These techniques can probe the progression of cancer, track deposits of abnormal dementia-causing proteins in the brain, or measure blood flow through a heart with cardiovascular disease, to name just a few applications.

While the bulk of the funding and activity done by the IAEA is to promote and monitor the safe use of nuclear energy, they have a portion of funding devoted to promoting peaceful nuclear projects such as the use of nuclear medicine in developing nations. Minoshima has been active in the IAEA’s nuclear medicine activities for over a decade and when he was asked to develop a dementia imaging project in developing nations with the latest molecular imaging techniques, he jumped at the chance to create something that would have such a broad impact.

Of the 44 million people worldwide suffering from dementia (including Alzheimer’s disease), two-thirds of them are in developing nations, yet only 10% of the population-based research occurs there.1 One pressing reason why the IAEA research project is being done in developing nations is that this majority of sufferers is not being understood, defined, or treated appropriately. Another reason is that distinguishing Alzheimer’s disease from other types of dementia can be difficult without the appropriate imaging technology and tests, and it is compounded by what physicians call “comorbidities,” or other health issues related to the one being studied. In the case of dementia, people who have had a stroke, people with HIV, and people with a traumatic brain injury all present symptoms and brain imaging that makes a clear diagnosis very tricky. What’s more, these three comorbidities are more prevalent in developing countries.

What is the key to accurately diagnosing Alzheimer’s in developing nations? Minoshima and his colleagues believe it lies in standardized data collection at each member nation, supported by a global, collaborative analysis.

This approach begins by understanding how much more advanced the diagnosis of Alzheimer’s is today than it used to be. In past decades, Alzheimer’s disease was diagnosed somewhat crudely by excluding other medical conditions. After years of work, researchers have discovered biomarkers that are present not only when symptoms are noticeable, but even before. They’ve learned that protein fragments called beta amyloid will clump together and form plaques on the brain, and they’ve developed a molecular imaging scan called Amyloid PET to detect them. One note of caution, though: this test is best used to rule out Alzheimer’s for people with cognitive impairment when amyloid plaques are not found, because beta amyloid is also common in healthy adults (especially over the age of 80) and in other forms of dementia. 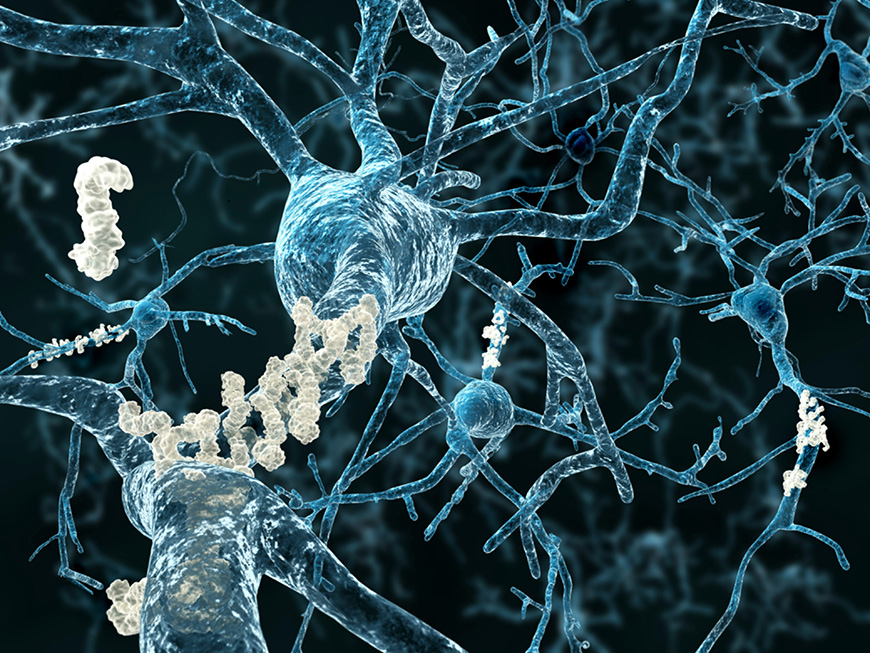 A second molecular imaging scan has also proved to be helpful in differentiating between forms of dementia. FDG-PET is a scan that looks at glucose (sugar) metabolism, and it is a very sensitive measure of brain function. Researchers – including Minoshima – have discovered that different forms of dementia produce unique patterns of glucose metabolism deficiencies in the brain. By studying these patterns with an FDG-PET scan, they can tell what disease is causing the diminished brain function.

In addition to these two techniques, several other biomarkers help with an accurate diagnosis. A protein common and necessary in the brain, called tau, will change and clump together forming “neurofibrillary tangles.” Some of it can be detected in the cerebral spinal fluid (as can some of the beta amyloid, coincidentally), making a spinal tap a helpful test. Recently, researchers have found a way to image tau deposition in living humans, and extensive research is ongoing. 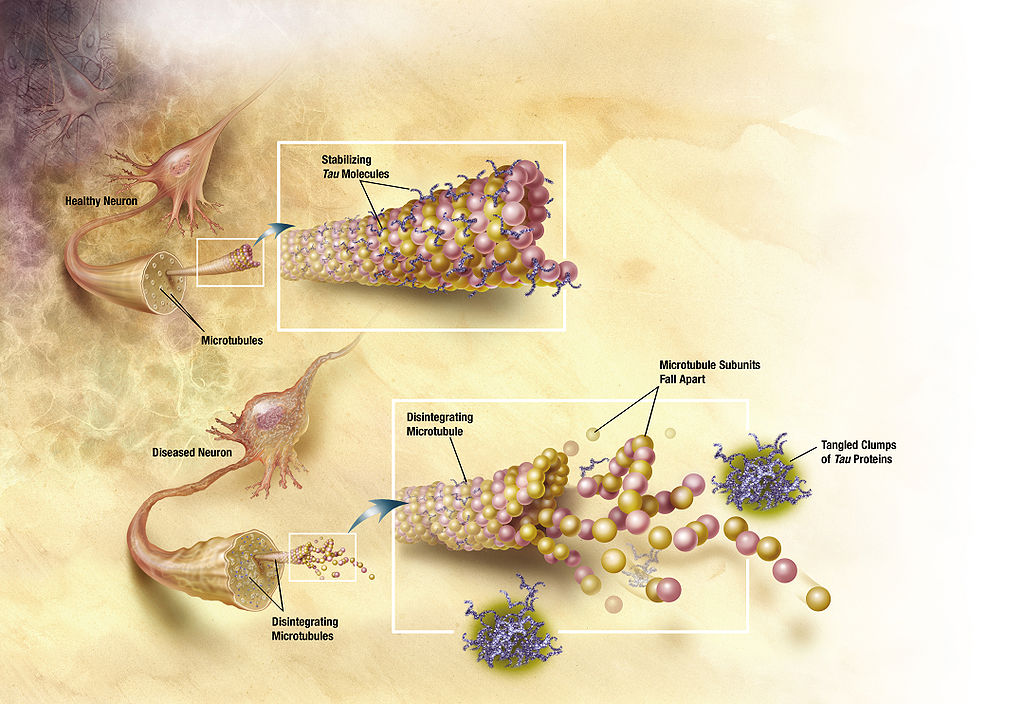 Diagram of how microtubules disintegrate with Alzheimer's disease. Illustration by ADEAR: "Alzheimer's Disease Education and Referral Center, a service of the National Institute on Aging." / Wikimedia.

A final biomarker is that brain matter dies back and shrinks slightly in Alzheimer’s disease, and an MRI scan is the best test for determining brain volume.

Of course, there are the noticeable symptoms of dementia: confusion, forgetfulness, language issues, etc. These are best measured with behavioral exams, called neuropsychometric testing.

A proper diagnosis of Alzheimer’s disease, therefore, involves an examination of many biomarkers and behavioral data. Minoshima and his team knew that achieving such a proper diagnosis would take standardized protocols for how to administer the tests, grade the data, share it widely, and interpret the growing body of data. Thus was born the IAEA coordinated research project, entitled, “Enhancing Capacity of Neuroimaging and Biomarkers: Application in Early-stage Alzheimer's Disease with Comorbidities.”

A Data Community for Developing Nations

Molecular imaging is not inexpensive: in addition to expensive, state-of-the-art scanners, a facility must be able to access to radiotracers, house and manage huge data files, and train many staff in how to prepare, administer, and interpret the tests. As a consequence, the countries participating in the IAEA project are generally not the poorest, but ones that have enough stability, income, and social program infrastructure to invest in better health care.

Ten nations are involved in the project: Spain, Thailand, Bulgaria, Uruguay, Estonia, Slovenia, Chile, Bangladesh, India and South Africa. Minoshima has been impressed on his visits to several sites in these countries. They have concentrated their investments on a range of the top equipment, and he notes that the facilities are excellent: “some have technologies that medical centers in the U.S. don’t have all in one place,” he says. One drawback, however, is that often there is just one site in the entire country with these imaging technologies.

The problem with having all of your expertise and technology in one site, Minoshima explains, is that you lack a community of researchers and clinicians at different facilities with whom you can compare interpretations and learn new techniques. Gathering data is one thing, but interpreting the data correctly, processing it in multiple ways to innovatively arrive at novel and more sophisticated analyses is something that takes many minds working simultaneously at different locations. This type of environment – maintained in large part thanks to academic medical centers – is one of the reasons the medical imaging field has grown so much in first world countries like the U.S. That’s why Minoshima and his collaborators specifically aimed their research project at creating a community for data analysis and best practices.

A Core Lab in Utah

The project defines detailed protocols for all member nations to follow for FDG-PET, amyloid PET, MRI, spinal tap, and 7 different neuropsychometic tests. The real benefit to the member nations, however, is the coordinated use of the data they collect.

All cerebral spinal fluid samples are sent to one of Minoshima’s colleagues, Henrik Zetterberg, MD, PhD, in Sweden for analysis, and then sent on to the Central Core Lab in Vienna, Austria (home of the IAEA). All PET and MRI data is sent to the Core Lab Minoshima has established at the Utah Center for Advanced Imaging Research (UCAIR) here at the University of Utah, where servers run software that Minoshima himself wrote in 1995, called NEUROSTAT/3D-SSP. This software takes the voluminous data gathered in each PET scan and performs statistical analysis to produce quantitative maps for nuclear medicine physicians and radiologists to interpret. Minoshima has also provided this software free of charge to all of the member nations so that they can read and interpret all of the data; and the software is currently used in 43 countries worldwide. 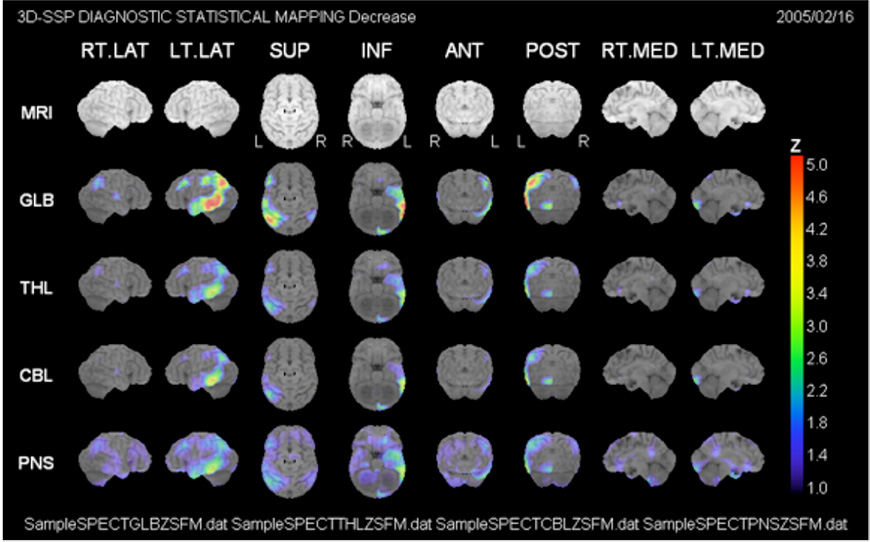 Example of an analysis done with the NEUROSTAT/3D-SSP software.

The PET and MRI data is sent to the Central Core Lab and shared with another Core Lab. A third colleague in Spain, a nuclear medicine physician named Javier Arbizu, MD, PhD, also helps to analyze and combine all of the quantitative data gathered for each patient. Member nations are encouraged to analyze their patients’ results, compare and learn from the larger data set, and develop a community of expertise. The result is a highly collaborative, global, and high-tech approach to better diagnosing Alzheimer’s disease in developing nations.

Minoshima is very optimistic about the project, especially after having visited and met with physicians in member nations. “There is a huge enthusiasm to use emerging technology,” he relates, “more than us, in some cases. There is great motivation to be helping patients in this way, and they’re so eager to learn when there are cases they haven’t seen.”

While dedicated to providing the best possible care here in our region, we are thrilled to help developing nations around the world harness the power of emerging technologies to better treat disease.