A few years ago, 30-year-old web designer Jim Vreeken, noticed a little bump on his forehead. It wouldn’t have been too concerning if it wasn’t for the headaches and bloody noses. His doctor checked it out and guessed that it was probably just a cyst that he should not worry about.

A year later, Jim was shocked to learn that this “cyst” was just one visible manifestation of a tentacled, ping pong ball-sized tumor growing outward from the skull base into his eye and face. It needed to be removed soon or Jim’s vision could be at risk, not to mention his overall comfort.

When Jim’s headaches worsened the year after his initial diagnosis, his wife Chelsey, a clinical nurse, encouraged him to see a specialist.

“It was clear that the tumor was causing his right eye to protrude more than his left, and it had considerably more pressure behind it,” explains his neuro-opthalmologist, Alison Crum, M.D. of the Moran Eye Center. She suggested they perform some scans to discover what was going on.

A CT and an MRI revealed the large tumor called a neurofibroma that had spread from deep in his cranium outward through the complex anatomy in front of it. Over years, it had pushed its way into Jim’s eye socket, and through a cranial passageway called the foramen rotundum where it was wrapped around the trigeminal nerve. This nerve is responsible for sensation in the face and motor functions such as biting and chewing.

Crum, who knew that it would be a complex task to remove the entire tumor, consulted ENT surgeon Jeremiah Alt, M.D., Ph.D. Right away, Alt knew this was the perfect case for new advanced visualization techniques that were under development at the University of Utah.

What ensued shows the power of a new age in 3D modeling in medicine, made possible by involving specialist physicians in this quickly advancing technology.

The Value of Virtual Reality

Peering into the virtual reality headset and grasping the interactive Touch controllers, Alt seemed to be navigating outer space. Instead, he was taking a virtual tour of Jim’s cranium and the invasive tumor inside.

He zoomed in to examine how the tumor had wrapped itself around the trigeminal nerve and magnified it many times its actual size. He grasped and rotated the virtual skull, tracing the route he had chosen to surgically extract the tendrils of the tumor. Next, Crum traced the route she was planning to use for her portion of the surgery, and then they introduced a resident surgeon-in-training to the amazing tool.

“It was quite incredible,” marvels Alt. “I could move the tumor, bone, soft tissue, and neurovascular structures in ways you never could using just your imagination.”

This virtual journey is the work of neuro-radiologist Edward Quigley, M.D., Ph.D. and research colleague James Mathewson, M.D. For the past several years, Quigley and ANVIL, the Advanced Novel Visualization and Imaging Laboratory, have been quietly moving forward the science of 3D visualization and modeling at the University of Utah. Unlike previous models, Quigley’s 3D models merge data from a variety of radiologic scans rather than a single scan. The work is painstaking, but the results take visualization to new dimensions.

every slice of each study and merging the data in software programs. Quigley points to the importance of having physician specialists like Mathewson involved in this process. “You need imaging specialist physicians reviewing the images and selecting what you’re going to print and what you don’t print,” he emphasizes.

Inevitably, patients are oriented slightly differently from image to image, and the duo used several techniques and safeguards to ensure the digital slices were aligned precisely. “if you’re off by a millimeter or two, structures in the models may be aligned differently than what you’d experience in surgery.”

The virtual model they created provided an entirely new way for Crum and Alt to investigate the structures involved in the surgery, and it was about to do more. It became the blueprint for a multicolored physical model to help the Vreekens better comprehend the surgery.

A Model To Hold

Jim and Chelsey had seen scans that clearly revealed what looked like a sinister blob behind Jim’s eye. But it was more difficult for them to grasp how the tumor sinewed through his skull base and eye socket.

“Looking at an MRI is like looking at the stars in the sky – you tell yourself that there are other planets out there, but I can’t really imagine what they’re like,” explains Chelsey. “There was still a lot of fear going into the surgery.”

Quigley knew that having a tactile experience could make all the difference. A far cry from the hard, clunky anatomical models from high school science class, 3D modeling and printing technology has progressed astronomically over the past few decades – “like going from stone age sculpture to computer models in 20 years,” says Quigley. And it will only continue to advance.

The virtual model data was turned into a sophisticated printing path for a 3D physical model. They employed state-of-the-art 3D printers at Whiteclouds in Ogden, Utah, to manufacture the major parts of anatomy using different colors and materials.

For Jim, holding a model of his skull that Quigley’s team made, and being able to see and touch the mysterious tumor inside, changed everything. “The 3D model made it real – I really understood that I needed to get that out,” he says.

Quigley explains that using 3D models for patient education can be particularly helpful when doctors describe the risks and benefits of a surgery – they can point out structures specific to the patient. Radiologists spend their days visualizing anatomy and tissues, and Quigley is thrilled to have a way to translate this knowledge for patients.

“It was no longer something so mysterious. I felt a lot more peace and a sense of control over the situation,” Chelsey acknowledges. 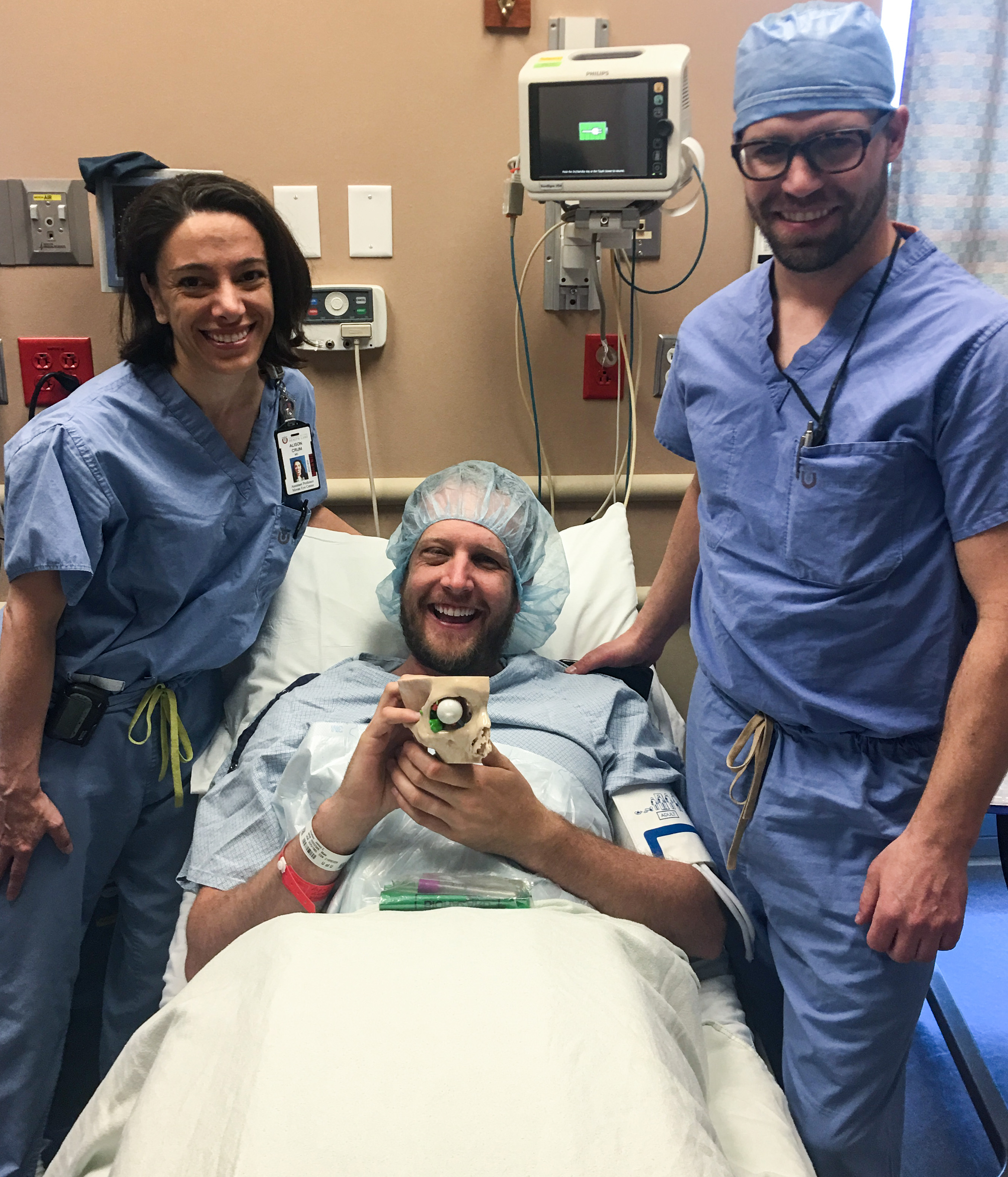 Quigley knows his models are perfect not only for educating patients, but also physicians. He is actively using them as teaching tools to help physicians learn advanced anatomy and surgical approaches. For instance, he printed a destructible model from a drillable material for Alt to use in his skull base research lab, where resident physicians can practice different surgical approaches on a model.

Beyond patient-specific sugeries, Quigley envisions how physicians in training could practice many types procedures. “Bone can be printed from a very hard material, but inside and around it you can print muscle that has flex and give, delicate blood vessels from a different material, and even fluid-filled spaces,” Quigley notes. Physicians facing their first biopsy, aspiration, or joint injection could perform it with much more confidence if they had practice on an anatomically correct, realistic model.

Several other U Health radiologists are exploring this avenue with Quigley to produce realistic models for typical anatomy as well as more uncommon anatomy that physicians might face. “It’s truly a flipped classroom experience where the model can drive the curriculum for the medical students or residents,” Quigley declares.

As for the Vreekens’ case, the feeling of control that modeling gave both patient and physician was immeasurable. Crum and Alt’s surgery went smoothly and Jim is now tumor-free. There was no damage to his sight, no lingering side effects, and he was back to work in two weeks.

“When you’re a patient or family member, you want as much information as possible,” says Chelsey. “The sense of empowerment that we both felt after seeing and holding the model meant everything.” 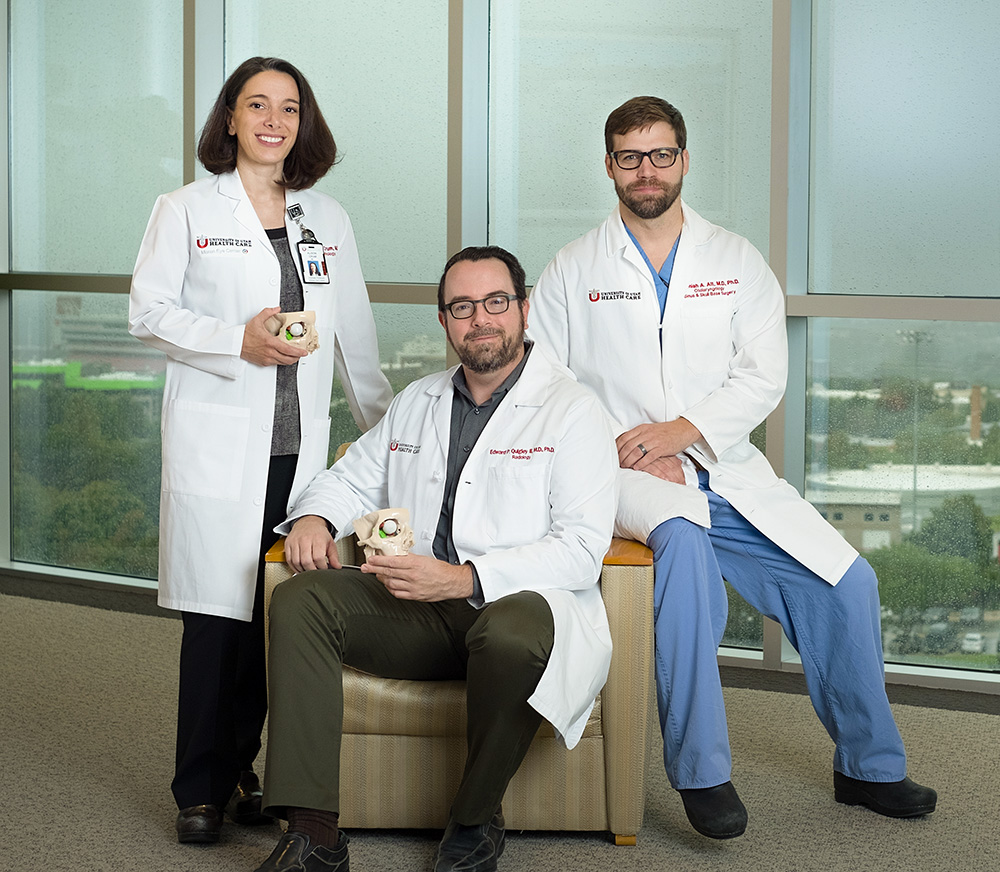