Multiple sclerosis (MS) is an unpredictable demon. People with MS may experience numbness and tingling or have blurred vision; they might have difficulty controlling motor functions or overwhelming fatigue. Maddeningly, these symptoms occur in a cycle of relapse and remission. During a relapse, the pain, fatigue, and inability to move become debilitating. Periods of remission provide relief that lasts weeks or months. For some, remission can continue for years, leaving the person entirely symptom-free. Even during a long remission, though, MS is not cured and the possibility of relapse is ever-present.

MS is a mysterious autoimmune disease, often defying quick diagnosis and treatment due to the complex hereditary and environmental factors that play a role in one’s likelihood to suffer from MS. Symptoms closely resemble those of other nervous system diseases, and there is no single test to diagnose it. Instead, doctors use bloodwork, brain and spinal cord imaging, physical examinations and spinal fluid testing to rule out nutritional deficiencies and other autoimmune diseases that may mimic the symptoms of MS. 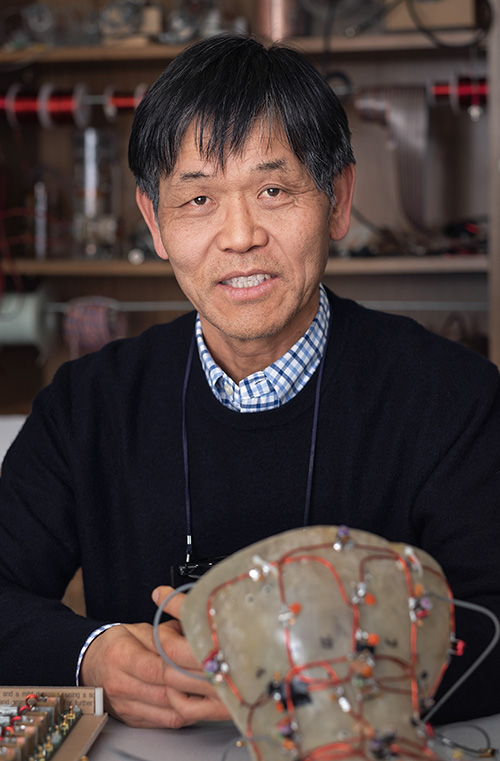 After being diagnosed, a patient is presented with an array of treatment options. Doctors can prescribe steroids to reduce inflammation during relapses, and physical therapy can help with the loss of motor control to some extent. There are currently 16 FDA approved therapies which can reduce relapses and disability progression, but there are no approved medications that actually cure the underlying causes of these debilitating symptoms.

Eun-Kee Jeong, PhD, a researcher in the Department of Radiology and Imaging Sciences, and John W. Rose, MD, Division Director for Neuroimmunology and Neurovirology, are researching a novel use of magnetic resonance imaging (MRI) to help doctors better understand the lesions that cause MS symptoms during periods of relapse.

This research, which also includes Lubdha M. Shah, MD from Radiology and Imaging Sciences, and Erica F. Bisson, MD, in the Department of Neurosurgery, was recently funded by the National Institutes of Health. Together, this powerhouse team of clinicians and researchers aims to improve the tools available to physicians in diagnosing, monitoring, and treating MS.

Think of the nervous system as a bundle of electrical wire responsible for transmitting signals. Messages from the brain travel to the body’s periphery, controlling our movement. Likewise, messages are sent from the body back to the brain, allowing us to sense the world around us. Our nerve cells have evolved sophisticated parts to help conduct impulses to each other in a vast network around our body. The part of the nerve cell responsible for transmitting impulses is called an axon (see diagram). 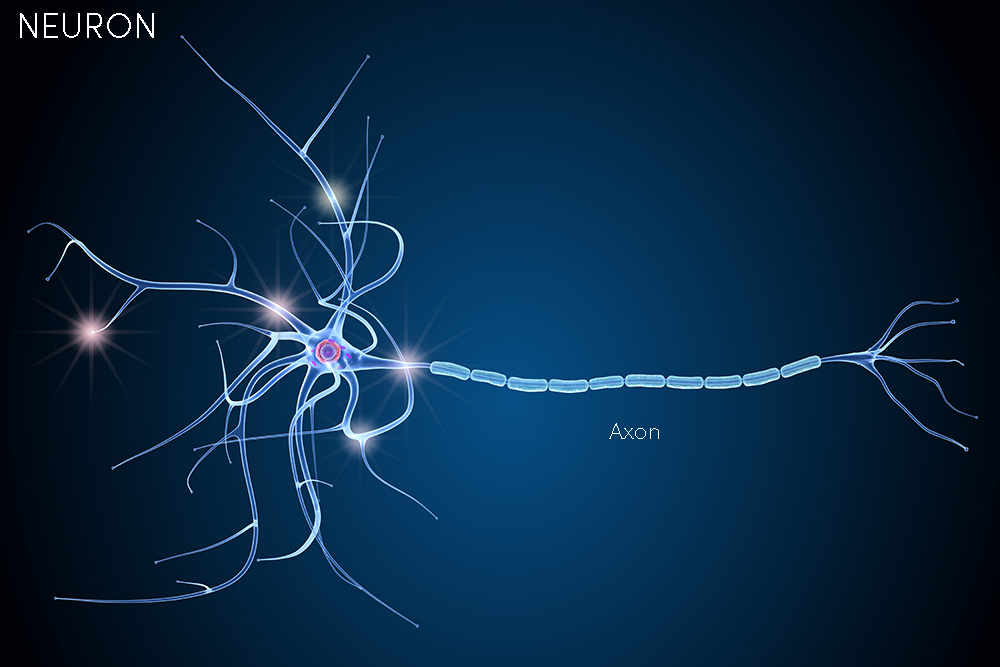 Like cords plugged into a single outlet, all of the neurons in the body must eventually reach the brain. The route is the spinal cord, and everything bundles through the neck in a section called the cervical spinal cord (CSC).

“In the cervical spinal cord, there are millions of axons,” explains Jeong. “If all of these axons were like bare wires, the signals would get confused and leak from one wire to another.”

Fortunately, axons are protected by myelin, an outer layer surrounding each nerve like insulation around a wire. The myelin sheath protects the axon from physical damage while allowing the electrical signal to travel effectively along the CSC.

In patients with MS, however, the appearance of lesions causes myelin around axons to break down. By exposing these electrical wires, mixed-up and short-circuited signals cause the symptoms of MS.

“When myelin is pulled off of the axons, it’s like peeling back the insulation on the wire,” Rose says. “That leads to slow nerve conductions.” The result of this slowing of the nervous system is that signals fade before reaching their destinations. Jeong and Rose’s team are researching and implementing new imaging methods that allow them to observe axonal lesions and discern the health of myelin in the CSC—something thought impossible until their work began.

Water makes up much of the human body, and the CSC is no exception. The impulses carried along axons to and from the brain travel by way of water contained within the myelin sheath, called intra-axonal water.

“In healthy, myelinated axons, intra-axonal water can only move along the fiber,” Jeong explains. “The water is restricted, like the inside of a tube.” Signals can travel extraordinarily quickly within these miniscule tubes.

The lesions affecting patients with MS allow intra-axonal water to move out of the axon (mixing with what’s called extra-axonal water) rather than continuing along the nerve’s pathway. This means that if water flows freely through the CSC, it’s likely that some myelin sheaths have been compromised. Knowing this, Jeong reasoned that observing the way intra-axonal water moves along the CSC would tell him if myelin was intact or not. If water leaked from the axons at unusual locations, he could measure the level of demyelination at that point along the axon.

Diffusion-weighted imaging (DWI) is a way to view the random microscopic movement of water molecules with an MRI study. The scan detects the way water spreads—or diffuses—over an area. The level of sensitivity to diffusion is called the “b-value.” The more sensitive the b-value of an image, the more vividly it will show diffusion. While DWI has routine clinical applications, its use in the CSC is problematic. 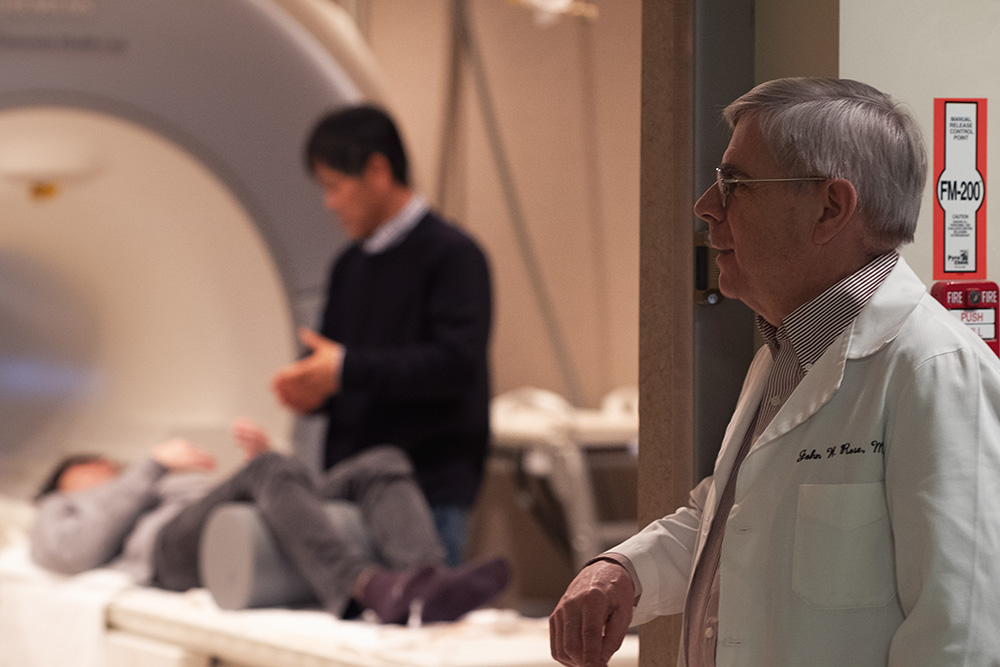 Jeong speaks with a volunteer at the MRI scanner while Rose looks on.

The problem is that most MRIs pick up signal from both intra- and extra-axonal water. This creates an image crowded by so much noise that it is impossible to tell how any of that water is moving.

“The images would be nothing but background noise,” Rose illustrates. “With traditional imaging, you wouldn’t be able to distinguish between types of water.”

Jeong’s solution was to develop a new imaging method to better view this diffusion in the CSC.

Jeong’s new MRI method is capable of suppressing the signal from extra-axonal water while picking up much more detailed information about the behavior of intra-axonal water. This new method, called Ultra-High B Diffusion-Weighted MRI (UHb-DWI), uses intra-axonal water movement as a form of measurement. UHb-DWI gathers such detailed information about diffusion within the axon because it is roughly ten times more sensitive to water movement than typical DWI (hence the name “Ultra-High B.”)

In nerves with healthy myelin, UHb-DWI shows water molecules moving in their typical random diffusion patterns within a confined space created by the myelin layer. But when myelin is damaged, water moves freely, not following the path of the axon. By suppressing the signal from extra-axonal water, Jeong can determine more accurately how water is moving within the axon.

Jeong has found that determining the “normal” flow of intra-axonal water is no simple task. The structures in our bodies differ from person to person and across demographics. Axons do not follow the same paths in different bodies, meaning the water will be expected to move differently depending on factors such as the patient’s age and sex.

A short-term goal of Jeong and Rose’s research is to acquire reference data from subjects of different demographics. This will define what is considered “normal” behavior for intra-axonal water in a variety of healthy, myelinated subjects.

A Hands-On Approach from Start to Finish

Conventional MRI hardware would not be capable of capturing clear and detailed images with such a high b-value. This was an initial challenge with using UHb-DWI in a region as densely packed as the CSC, but Jeong saw this as an opportunity for innovation. He decided to build his own MRI coils. If there was not a sufficient piece of hardware available, he would make it himself.

“I am a person who likes to do everything,” Jeong admits. “I want to be involved in the process from start to finish.” Indeed, Jeong has proven this by machining devices that resemble neck braces, made to fit the patient with precision. Within the neck brace are eight radiofrequency receiver coil elements, each of which functions as an antenna in the MRI machine. By putting these antennas as close to the CSC as possible, Jeong’s hardware yields high-resolution images. 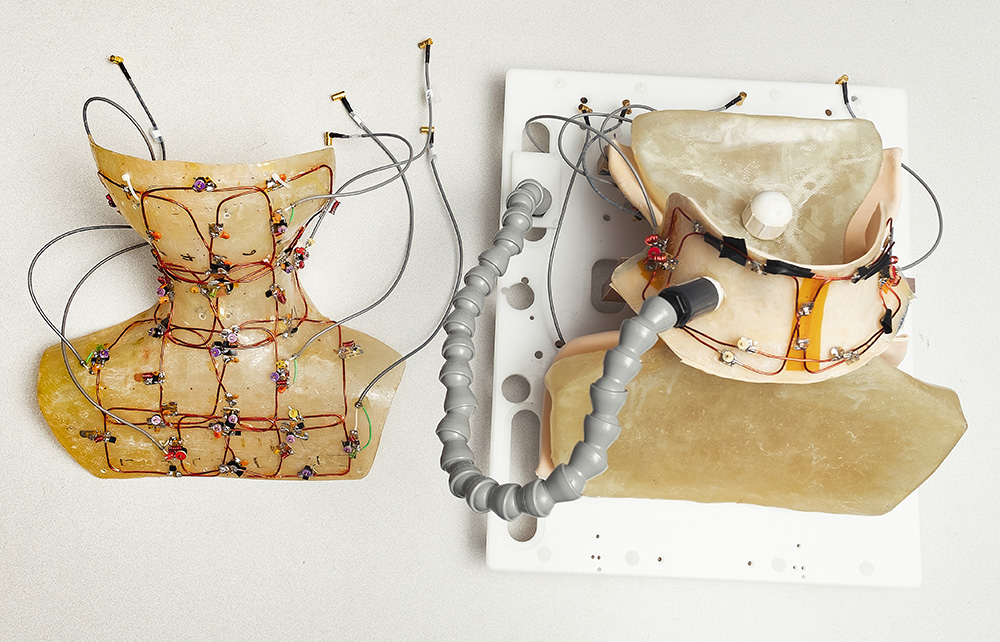 Jeong’s custom-built MRI hardware enables high-resolution, high signal-to-noise ratio imaging of the cervical spinal cord. The form on the left sits underneath the patient, imaging the back of the neck while the collar on the right sits on top of them, imaging the front of the neck.

Jeong’s background in physics gives him a strong theoretical and practical understanding of how MRI technology works. During his PhD, he also took machine shop courses. “I learned about welding, gas handling, motors and magnets, vacuum pumps and cryogenics—everything I could think to study.” His wide base of knowledge has prepared him for the innovation needed to develop new MRI methods.

Rose agrees that Jeong’s ability to craft new hardware, data acquisition techniques, and data processing software, has been crucial to this research. Using Jeong’s coils and devices, Rose acknowledges, provides “an automatic upgrade in quality, which can’t be matched by the conventional coils and MRI methods on the market today.”

Researching the CSC comes with a host of challenges, but Jeong is not discouraged by the complexity of his work. “I wanted to solve a difficult problem,” he asserts, reflecting on his career so far. “Spinal cord imaging is incredibly difficult, but developing this new method is important for helping patients with MS.”

Once an image has been captured using Jeong’s carefully developed coils and UHb-DWI, the information can be examined at a highly nuanced level to detect even the smallest areas of demyelination.

“The ability to go down to a single-pixel level with our software is amazing,” Rose says. “We can use patterns of pixels to look at a whole lesion, or even zoom in and look at parts of a lesion.”

One Tool for Diagnosis and Monitoring

Rose is optimistic about the clinical applications of UHb-DWI. He envisions several uses for this new imaging technique throughout a patient’s treatment process.

First, it will help diagnose MS more quickly by detecting demyelination in the cervical spinal cord. Early detection is very important, because demyelination leaves a patient’s axons exposed. While it may be possible to recover myelin, an exposed axon risks permanent damage. When an axonal nerve is destroyed, there is no way of recovering that nerve. “We want to help diagnose MS more quickly,” Jeong says, “so patients have a chance of keeping their electrical wiring intact.”

Later, UHb-DWI will help clinicians monitoring myelin levels in the CSC during periods of remission and relapse (something not possible with less sensitive imaging). This monitoring might even help predict periods of relapse by noticing the recurrence of demyelination. 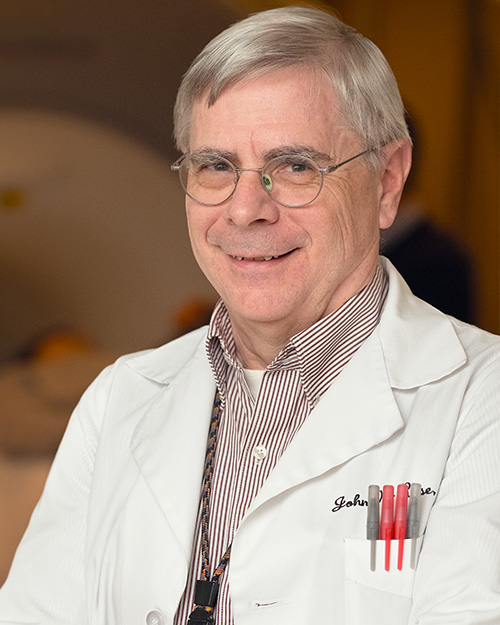 Rose has been monitoring patients as part of a clinical course, observing the relationship between periods of relapse and measurements of demyelination. “In several patients, around 200 days in, there was a restoration in the UHb-DWI measures, back towards their normal range, indicating improvement in axonal health and, potentially, remyelination,” he says, noting the ways they have already implemented this technology for monitoring purposes. “We just evaluated a patient at the 1000-day time point,” Rose continues, “and the myelin was back to almost their baseline level.” This patient showed discernible improvement of symptoms along with this increase in axonal and myelin health.

Eventually, Jeong and Rose believe UHb-DWI will even help track the recovery progress in MS patients. Thanks to UHb-DWI, myelin health can be measured quantifiably. With advancements in medicine, it may be possible to counteract the effects of MS through a re-myelination process. Monitoring the same patient over time, called serial imaging, would give doctors a sense of which patients are most likely to respond well to re-myelinating treatments, based on patterns of myelin growth between relapses.

“With the imaging we’re doing,” Rose says, “we’re going to see things no one has seen before.”