C-arm machines are quietly transforming how medicine is practiced. It’s a simple concept: a machine that can rotate around a patient on a table, providing high-quality x-ray imaging in the environment where procedures can be done. No waiting for a patient to travel to the x-ray room or the CT machine. Physicians can take immediate action and use the imaging to guide their interventional procedures.

“C-arms are the Marines of image guided procedures, ready to tackle a procedure anywhere at any time,” relates Keith Quencer, Interim Section Chief of Interventional Radiology. Quencer notes that almost every field of medicine is doing more and more imaging-guided procedures, and C-arms are making this possible. Indeed, Kirk Mosher, Finance Director for Radiology and Imaging Sciences has seen large usage of C-arms in pain management clinics, GI, urology, surgery and ORs, orthopedics, and the Clinical Neurosciences Center.

Manufacturers like Siemens and GE have certainly noticed the trend. They are investing in the research to make C-arms safer and even more powerful. The radiation dose is getting lower while the imaging is getting more sensitive. The dream is to enable C-arms to provide 3D images equivalent to those captured by a CT machine, but many hurdles lie in the path.

For generations, the large manufacturers have fostered collaborations with academic researchers, knowing that the power of many brains in many places will always make a better product for patients. One such partnership is between University of Utah researcher Frederic Noo, PhD and Siemens Healthineers, and they’ve had CT-quality imaging from C-arms in their sights for over a decade.

Noo, a Belgian-born scientist who has been advancing computed tomography (CT) at the University of Utah since 2001, has decades of experience investigating the limitations and potential of CT and x-ray technologies. Around the year 2000, Noo explains, the manufacturers of C-arms were saying they’d like to offer 3D capabilities like a low-end CT scanner. “But for a long time, C-arms have been stuck on circular short-scan rotation,” explains Noo. This means that an x-ray emitter sits on one end of the “C” and a large, flat panel detector sits on the other end. The patient’s body lies between them and the C quickly swivels on one circular path around the patient to collect the images.

Noo cites a few problems with this approach. First and most limiting, the single, circular path introduces what are known as cone-beam artifacts. We can understand this concept by imagining walking around a column of a building, staring straight at the column. We see all around the column (if we had x-ray vision, we’d even see inside it), but we can’t see what’s above or below the column. By not traveling above or below, we essentially have a blind spot in the shape of a cone emanating from the top and bottom of the column. 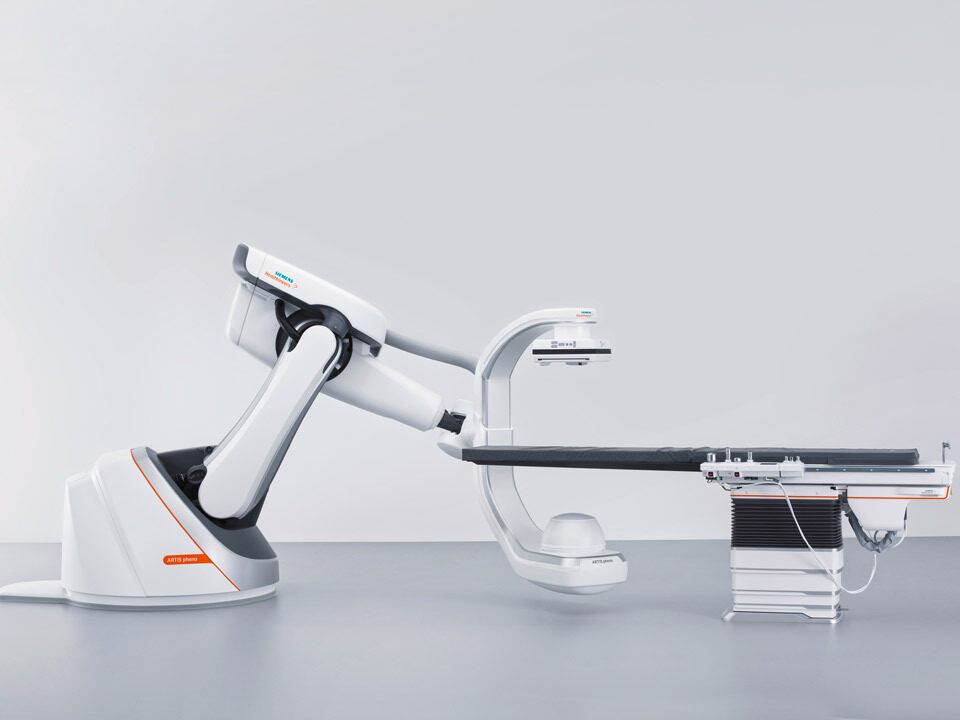 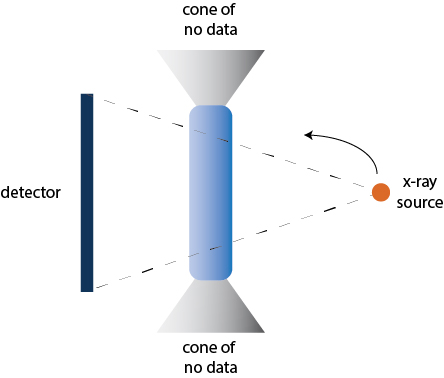 The Siemens Artis Pheno (left) showing the x-ray emitter and detector on either side of the “C,” which spins around the patient. The problem with a short circular scan (right) is that a single plane of scanning introduces “cone artifacts” where no data is gathered at either end of the cylinder that is scanned.

The second limitation Noo points out is that the large detector, while allowing for a wider spread of x-rays and a larger image, requires higher doses of radiation. This is because the wide detector captures lots of “scatter” from the x-rays being diffracted by body tissues – this scatter acts as noise on the resulting image. The only way to overcome the signal-to-noise (SNR) problem is to keep the dose high enough to light up tissues appropriately on the image.

Noo is happy to tackle the challenge, thanks to innovations in the machines. “Siemens has introduced robotics to C-arms, so we can do more complicated capture paths around the patient,” he explains. “We believe we can solve both problems at once.” For the past 17 years, Siemens has provided Noo’s lab with grant funds to explore different trajectories that might overcome these problems.

It’s a complicated problem of 3D geometries. Noo and his graduate students have mapped out many scenarios for how an x-ray source that emits a cone of x-ray beams can travel around a region of interest and a detector on the other side can collect snapshots from myriad angles to form a 3D image with very few dead spots and artifacts. It demands a lot of trigonometry, geometry and advanced calculus. They think they’ve got a winner with their 10th generation of the acquisition geometry, refined and improved over each generation.

They call it LELEL, which is short for the actual trajectory: Line-Ellipse-Line-Ellipse-Line. This describes the way they program the robotic C-arm to move around the patient. 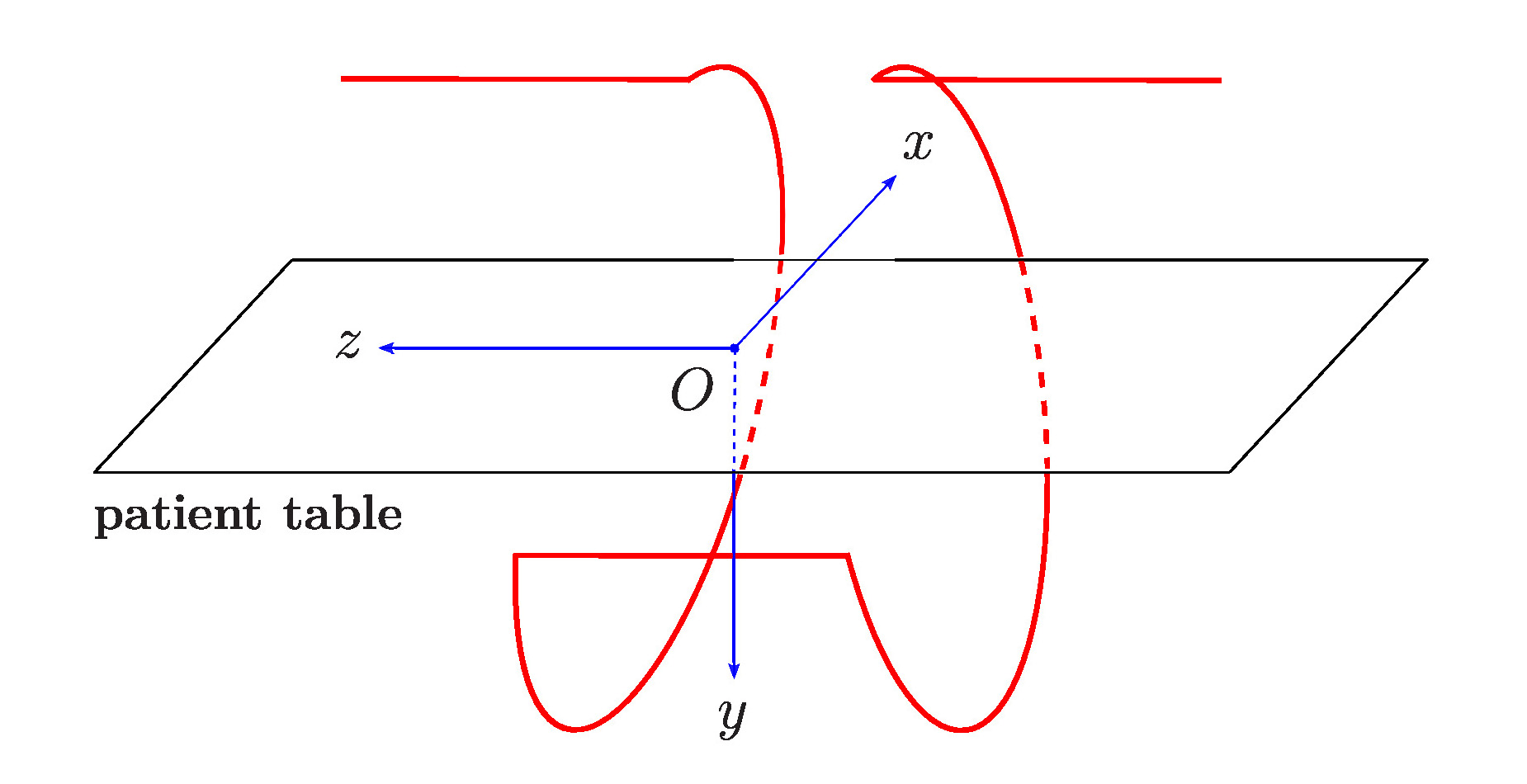 Noo is meticulous about his math and he’s just as thorough in applying it to the real world. Coming up with an ideal acquisition geometry was like choosing which track shoes to lace up before running the race. “It opens up many new problems,” he states. “How do you perfectly know the new, real geometry (instead of ideal) so you can use it for reconstructing the data, how do you know it’s reproducible (the electric current put into the robotics creates a vibration – is it the same every time?), how will you perform the image reconstruction, how will you correct for imperfections, how do you program the robots in the first place?” So much for celebrating the small win.

Life on the Assembly Line

One of the most exciting aspects of cutting-edge science is that you get to work on technology before anyone else. This has its drawbacks. Zijia Guo, a doctoral candidate in Noo’s lab discovered this on all four of her trips to Siemen’s manufacturing plant in Germany.

She spent her first two years with Noo transforming the previous generation ELE to the new LELEL and testing it with computer “phantoms” that mimic scanning living tissue. This work involved lots of programming on the Matlab software platform. She was steeped in 3D graphing, envisioning how “ray-sums” would add up for every piece of an x-ray conical emission. These ray-sums count the density of pixels along the path from the emitter to detector (this “density” is a measure of how much the tissue absorbs x-rays). After she finished her programming, they simulated how the resulting collection of data would create a clear 3D image.

After this preliminary work, Noo and Guo were ready to apply their custom acquisition geometry and Matlab reconstruction program on Siemens C-arms. Guo traveled to the plant in Germany where their researchers had to write a software patch in their own proprietary software code to translate her Matlab work. 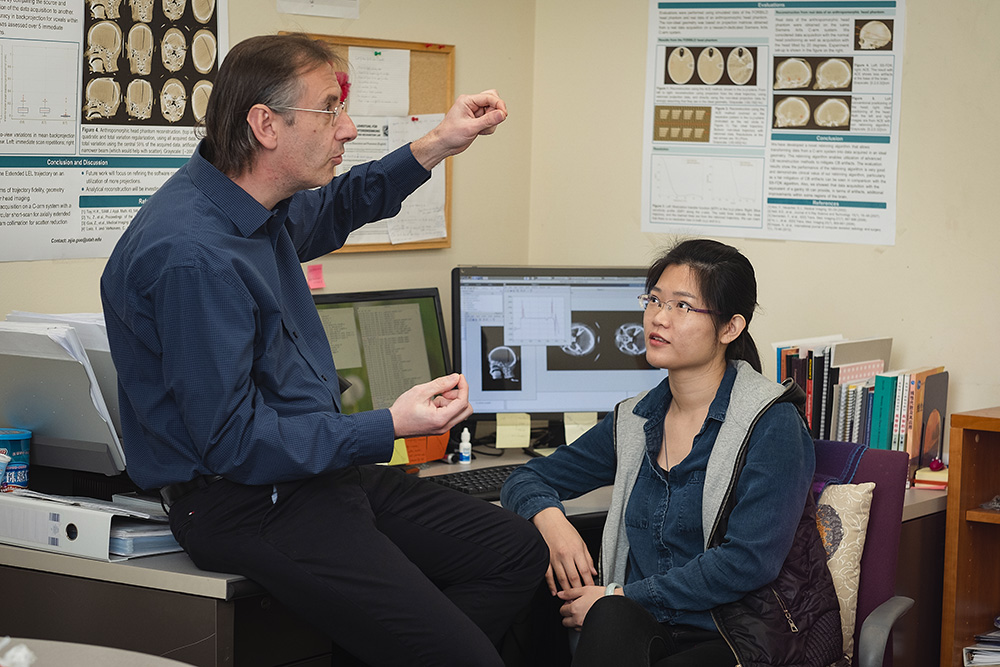 “It’s not like a lab here,” Guo explains with a laugh. “You need to communicate with a lot of people to schedule time on the machine, make sure it is well-maintained and perhaps re-calibrated, or calibrated for the first time.” She would insert herself into the production chain where machines were available but perhaps not be ready for prime time. She learned a lot of organization and coordination to navigate the corporate manufacturing system and be able to run the experiments on a suitable machine.

Because the machine she was given access to was not designed to do her experiments, there was a question of whether it would be capable of giving her the outcomes she hoped for. Could the robotic arm really achieve a LELEL trajectory? The first three trips were not promising – the software patch continued to fail, to not produce the correct acquisitions that would add up to a nice 3D image.

They discovered that the challenge for the robotic arm was not the ellipse part of the LELEL trajectory, but the straight line part. X-rays don’t continually shoot through the subject during a C-arm scan. They are discrete moments – milliseconds apart and captured separately on the detector. The software needs to tell the x-ray source when to emit a beam during the course of the trajectory. They call these “control points.” The challenge for the robotic arm was learning how to consistently pause long enough during the line portion of LELEL to capture the correct snapshots.

After finding the problem and coming up with a solution, Guo was off to her fourth Germany trip in two years, ready to try again. Of course, the machines coming off the production line were now a new generation, and all of the calibrations and software patching needed to be done again. She was poised to complete the scan when she found out that the C-arm’s built in memory could only account for 150 control points instead of the 500 she had planned on capturing. She spent a frantic night re-evaluating and re-plotting her control points to work within the constraints. They ran the experiment on the last day of her visit.

To their delight, the amended acquisitions along the trajectory were reconstructed into a good 3D image. “We’ve been able to get accurate, high-contrast bone imaging with our reconstruction algorithms and show that it’s fairly reproducible,” Noo reports. The low number of acquisitions is too small to allow for low-dose and low-contrast imaging, but Siemens is augmenting their software and system memory to get more control points. 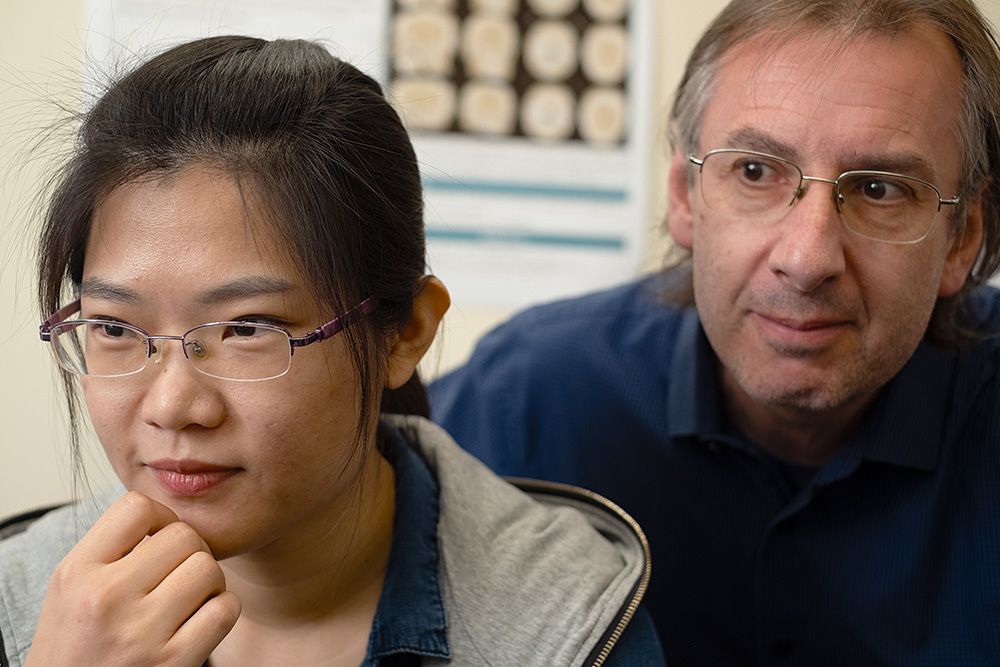 “We feel like we’ve made a lot of improvements over the circular short scan,” Noo declares.

But it’s in need of more refinement. Noo likens his work to that of a car mechanic who looks at a car that won’t start and examines his life experience for the fixes that have worked in the past. Image reconstruction is puzzle solving and good researchers have the life experience to diagnose and accurately address the problems.

Academics and Manufacturers: A Healthy Partnership?

There are four main reasons why funding from manufacturers in imaging sciences research make sense:

Of course, it’s healthy for everyone to know about the financial relationships between researchers and manufacturers; this keeps both parties honest and transparent. It’s also helpful to understand how the field of imaging sciences research contains some inherent separation between manufacturers and researchers to minimize manufacturer bias on research.

Is the Investment Worth It? 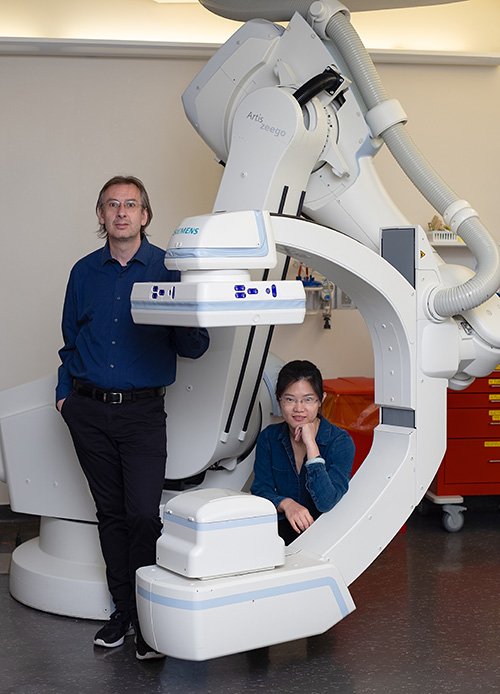 This is a very pertinent question in imaging sciences, where the costs of new technology can threaten to outweigh the benefits to the patient and the health system. So, why invest in C-arms to function more like a traditional CT machine?

Noo points to a few real-world examples. People with stroke are the first example, where time is of extreme importance. The first step is to find a pool of blood against white and gray matter. “This is a very low contrast difference,” he explains. Currently, patients go to a CT scanner to rule out bleeding, but they must then be brought to a C-arm room to remove a blockage or perform stenting. Then, patients must return to the CT machine to see if there is any more bleeding. If so, the entire process must be repeated.

More robust C-arm imaging would mean that a stroke patient could go straight to Interventional Radiology because the C-arm is good enough to see if there is hemorrhage or stroke. While there, action can immediately be taken. “This is the holy grail for C-arms,” Noo states, “A one-stop shop.”

Noo points out several other cases where investing in the Swiss army knife of C-arms is justified: investigating trauma along the whole spine and scanning/repairing the whole aorta in congestive heart failure.

We wish Noo continued success in his work that is helping to advance the state of medicine, and we are proud to have him as part of the research team in the Department of Radiology and Imaging Sciences.