Shuping Wang, A Hero in our Midst

At first glance, you’d never think that Shuping “Sunshine” Wang walked the courageous and difficult path of a Chinese whistleblower who was forced to start a new life for herself in the USA. She was quick to smile, diligent and quiet in her work and diminutive in stature. To put it another way, she seemed too carefree and generous to have dealt with a Chinese state that had intimidated her, fired her from multiple positions, and threatened her family.

Sadly, Shuping died while hiking with her husband Gary and friends on September 21, 2019, but her story is both relevant and inspiring to all who work in the health sciences. She alerted the Chinese authorities to cross-contamination at for-profit blood collection agencies in Henan province that contributed to a hepatitis C and HIV epidemic in the countryside. When officials tried to discredit her and destroy her findings, she persisted and spoke out more boldly, even taking the train to a lab in Beijing to confirm her HIV positive findings with her own money when she received no support in her home province. All of this led to her being fired, shunned, having to get a divorce, and leaving her home country to be exiled in the USA with no English language skills. (Read more of her story below in an excerpt from her obituary written by her husband, Gary)

When we hear stories of such courage, it is tempting to put these people on a different plane, to consider them aloof heroes operating in a sphere of high ideals and grand acts. But nothing is further from the truth for Shuping Wang. In fact, she was so humble, sweet, and focused on others that almost everyone she worked with had no clue of her past.

Shuping held several medical researcher positions at University of Utah Health. Dr. David Eckels (Virology/Pathology) was the first to hire Shuping from China in 2005 and she worked with him until 2011. She then moved to Dermatology 2011-2012, then moved to Nephrology working with Dr. Donald Kohan 2013-2016. She worked in Neurobiology & Anatomy with Dr. Richard Dorsky from 2017-2018. At the time of her death, she was working in Radiology and Imaging Sciences. Drs. Matthew Alexander and Gabriel Fine hired her into their Precision Therapeutics Lab in the spring of 2018 to help launch a number of cutting-edge studies.

“When we interviewed her, it was clear not just that she knew her science, but that she would be a great personality fit in the department,” says Amy Sikalis, Research Administrative Director.

Shuping was the main researcher working in the Precision Therapeutics Lab since Drs. Alexander and Fine also have demanding clinical duties. She worked diligently and independently, but her social nature was evident to those in the office at the Utah Center for Advanced Imaging Research. Her closest colleague, Matthew Zabriskie is the lab manager for several physician scientist labs in the department.

“Shuping was a joy to work with on a daily basis,” Zabriskie recalls. “She showed up to work every day with a smile on her face ready to work hard. She was extremely social, and reached out to her connections all over campus for advice on our projects.”

Zabriskie also relates that Shuping made people her priority, and no matter how busy her work schedule was, she found the time to ask her coworkers about their day. “Her skills as a scientist, but mostly her friendship, will be greatly missed,” he adds.

Alexander agrees. “Every day she brought warmth and joy to those with whom she worked,” he says. “Her personality perfectly matched her chosen English name of Sunshine.” 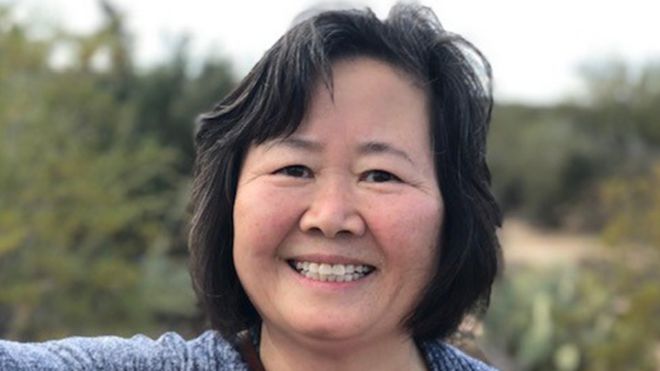 Apart from being a singularly kind person, Shuping was dedicated to rigorous science. This was at the heart of her refusal to brush the cross-contamination problem under the carpet in China – the public health risk was too great, and her integrity was too important to her. At her funeral service, Dr. David Eckels, who first hired Shuping from China to his lab in Wisconsin recounted the story of how Shuping did her work and had asked him how to complete the experiments.  “She asked how to complete the experiments. I told her there are two ways: an easy way and a hard way.  Shuping asked which way was the best way?  I told her the hard way was the best way and she said that is what I will do”.  She was not afraid of hard work. She essentially taught herself English as an adult with the help of her husband, and the first scientific paper she authored was held up as the standard for the Eckels Lab for years. When asked how she managed such a well-written paper with English as her second language, she replied with her characteristic ability to downplay accomplishments: “Google.”

Alexander echoes these accolades. “Beyond the difficult personal loss,” he says, “we will also miss the outstanding technical skills she brought to our investigations. She played an indispensable role in multiple projects using next-generation imaging. Among these, she was developing multimodal evaluation of a novel model of intracranial atherosclerosis, a profoundly debilitating disease that is poorly understood and for which current treatments are limited. Shuping left her home country, but she never lost her drive to serve the Chinese people. As intracranial atherosclerosis disproportionately affects persons of East Asian descent, we believe our investigation of this disease will honor her memory and serve as a noble motivator to continue our research to benefit afflicted patients.”

Shuping the scientist and Shuping the caring human were fully integrated. Perhaps this is best recognized in her love of her small, white dog named Bagel. She loved being outside with him and her caring nature was noticed by others and their own dogs. Several colleagues relate stories of seeing Shuping and Bagel either at the dog park or in the canyons, and having their own dogs run up to greet her like a long lost friend.

Sikalis was deeply affected by Shuping as a colleague. “She is the most caring person I have ever worked with,” she states unequivocally, “and an example of how it is important to make time for people, nature, and animals, not to mention to live every day to its, and your full potential. She was a remarkable inspiration.”

Michael Good, MD, Senior Vice President for Health Sciences, CEO of University of Utah Health, and Dean of the School of Medicine reflects on how Shuping’s story is important for us all. “Shuping’s story is a reminder that there are strong heroes among us," he writes, "and that perhaps the most meaningful acts we can perform are those on a personal, caring level. I am saddened by her passing, yet buoyed by the knowledge that she chose to make Utah her home and to share herself with so many of us in the University of Utah Health community.” 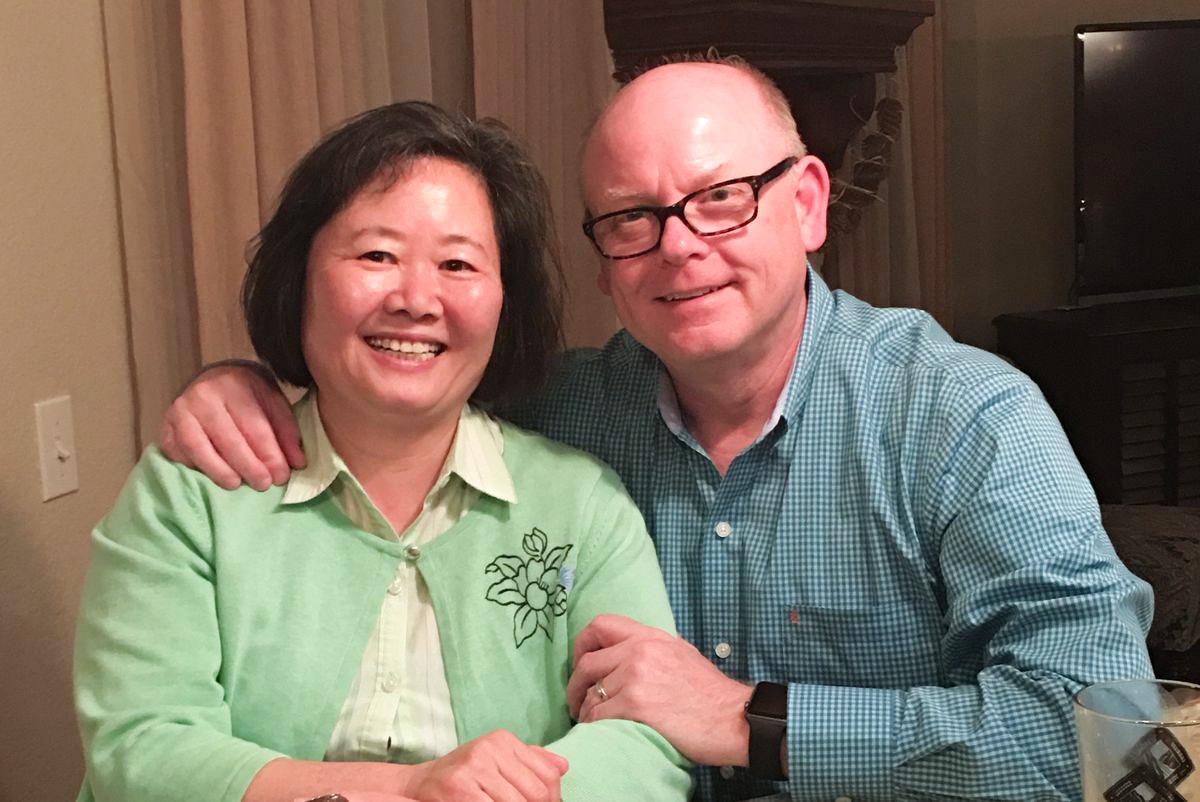 Shuping Wang and her husband, Gary.

More about Shuping’s early life from her obituary, written by her husband:

As a child during the Cultural Revolution, she witnessed her parents forced to kneel onstage with dunce caps on their heads and be denounced by thousands of villagers because her father had been a soldier for the Kuomintang Army. Red Guards called Shuping ‘spy daughter’ and tried to make her denounce her parents. She refused. At the age of eight she was kicked out of school. Shuping had an insatiable hunger to learn, and peeked in through the school’s windows to see what her teacher was writing on the chalkboard, until her classmates shut the windows on her. Finally, in 1972, at the age of 13, she moved away from her family’s village, changed her surname from Zou to Wang and was formally adopted by an uncle who was a Communist Party cadre. Only then could she go back to school.

In the 1980s Shuping was a doctor and researcher of hepatitis in China’s Henan Province. In 1991 she was assigned to work at a for-profit blood plasma collection station run by the Epidemic Prevention Center in the city of Zhoukou. While working at this station she realized that due to severe cross-contamination in the plasma collection process, government-run plasma collection stations were likely to become vectors in a hepatitis C and AIDS epidemic. When she reported her findings to officials at the Henan Ministry of Health in 1992 she was fired from her position.

In 1994, Shuping took a job in the Zhoukou Health Bureau. She also received permission to set up a Clinical Testing Center in one room of the Tuberculosis Institute. From inside this clinic she monitored her city’s blood supply. In 1995 she collected blood samples from 408 donors at local plasma stations and used personal savings to test each sample with three separate HIV kits. She found the HIV-positive rate to be 13%. Shuping reported her findings to the head of the Health Bureau, who challenged her results, suggesting her data was incorrect. She took 55 HIV-positive samples by train to the Institute of Virology in Beijing, where her results were confirmed. Upon return to her home province, she was interrogated by Provincial Security officers and berated by health officials who were furious at her for damaging the reputation of Henan province. Presumably acting on government orders, a retired health official was sent to damage her clinic and beat her with a wooden baton. Shortly afterwards the clinic’s electricity and water supply was cut off and Shuping was forced to shut it down. Her marriage suffered as a result of her whistleblowing, as did her domestic job prospects. Her then husband, who also worked at the Ministry of Health, was ostracized by his colleagues. Eventually they divorced.

In 2001 Shuping moved to the United States to begin a research position at the Medical College of Wisconsin, where she took the English name “Sunshine”. Several years later she married Gary Christensen, and the couple moved to Salt Lake City, where Shuping began work at the University of Utah and Gary took a position as Chief Financial Officer at Salt Lake City’s Living Planet Aquarium. Shuping’s friends and family knew her as a talented painter and exuberant practical joker who loved wearing rainbow socks and teaching her dog Bagel and cats Coco and Billy new tricks. All three of her children followed Shuping into the medical field. Her eldest daughter, Samantha Geng, is a Clinical Pharmacist at Tucson Medical Center. Her youngest daughter, Bingbing (Julie) Zou, is a Second Lieutenant Active Army Nurse at Walter Reed Military Medical Center in Bethesda, Maryland. Her son, David Zou, is a Quality Engineer at Dynatronics, a medical device company in Salt Lake City.

Shuping is also survived by her brother Tian Cheng Zou. Shuping was preceded in death by her parents Bang Yan Zou and Yun Ling Huang, and two brothers, Tian Jue Zou and Tian Yi Zou, all from China.

Even as she worked long hours to support her family and build a new life in the United States, Shuping continued to speak publicly about how Henan government-run plasma stations caused a rural AIDS epidemic. Every time she did family, friends and former colleagues back in Henan were visited by Chinese State Security. Still she would not be silenced. In late August 2019, after Chinese State Security officers made threatening visits to relatives and former colleagues in Henan, trying to pressure Shuping to cancel the production of a play inspired by her life that would have its world premiere at London’s Hampstead Theatre on September 12, 2019. Shuping was uncowed. Instead she called out her PRC bullies in a public statement that made international headlines and attended the premiere. At the curtain call the actress playing the role inspired by Shuping’s whistleblowing work invited Shuping to stand onstage and take a bow. She received a standing ovation.